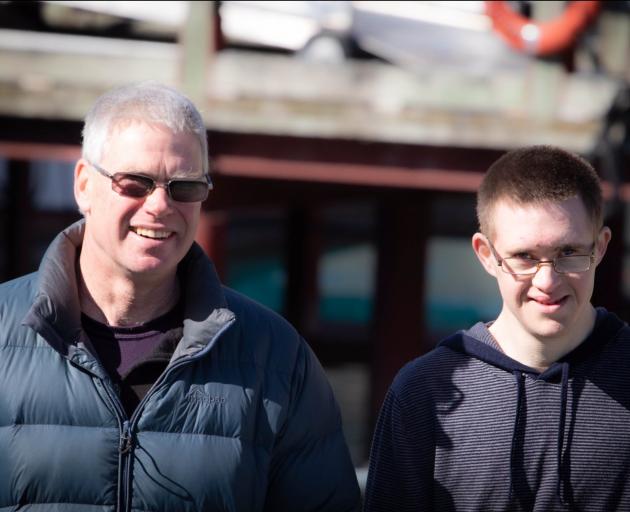 Invercargill man Nigel Winter, pictured with his son, Logan, has been recognised at the 2022 Minister of Health Volunteer Awards for his commitment to helping people with disability. PHOTO: SUPPLIED/VANESSA HARDLEY
An Invercargill man who was recognised for his volunteer work with a disabilities organisation says his biggest reward was seeing his son get his life back.

Last week, Health Minister Andrew Little announced the recipients of the 2022 Minister of Health Volunteer Award. Nigel Winter was awarded runner-up for the Community or NGO Health Service individual award at the ceremony at Parliament.

The award was a surprise for Mr Winter who was nominated by Central Otago Living Options, an organisation which has been supporting his 24-year-old son Logan, who was diagnosed with Down syndrome, autism, dyspraxia and mild intellectual disability.

"I feel pretty humbled to be honest. It is one of those things you do and don’t expect anything back.

"I am very happy with ‘runner-up’ in these awards, particularly as how there are always amazing people nominated every year. It is very humbling to have been nominated and acknowledged."

The Living Options Charitable Trust was set up in Alexandra in 2001 to provide support services in Central Otago for people with intellectual, physical and sensory disabilities, enabling them to live independently in their own community.

Over the past five years, Mr Winter has dedicated more than 800 hours volunteering to the organisation by travelling from Invercargill to Alexandra every three weeks, where he looks after the garden, lawns, and maintenance at two properties where people who have disabilities live.

He has completely repainted one of Living Options’ houses, using his annual leave to do the job and paying for the hire of equipment and paint himself.

"Raising a kid with disabilities has its challenges and after 20-odd years I can finally see my son having some life back and his freedom. That is awesome.

"People there are amazing and seeing my son being encouraged to take control over his life is everything for me. If wasn’t for them, life would be pretty hard."

Last weekend, Mr Winter travelled to Alexandra to celebrate the award with his son — a moment he would never forget.

"I received a message saying he was really proud of his dad.

"It is a very special and I feel good to be able to share this moment with him."