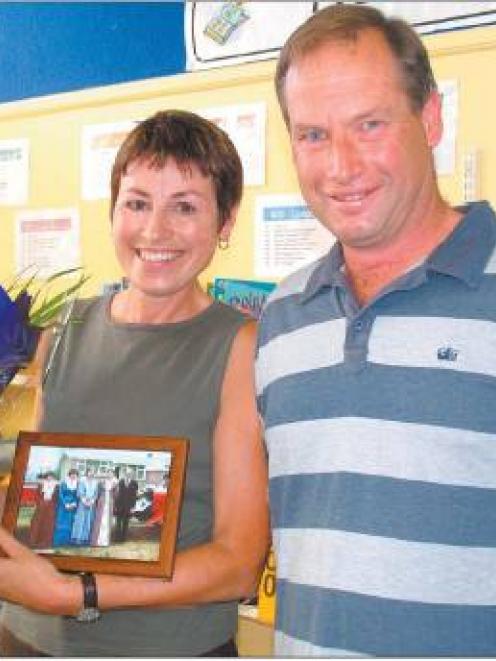 Mrs Ryan said she started teaching Standard 2 children at West Gore School, but had been with new entrants ever since she took up her post at Waikaka, 30 years ago.

‘‘It's one of the most important parts of a child's life and forms their attitudes towards school forever.

‘‘If they don't love school when they first come here, kids will struggle,'' she said.

She said although she had taught for 30 years at Waikaka, she had lived the whole time in Gore and travelled out daily.

‘‘In the early days, my first car wasn't very reliable and I was always having to borrow family members' cars, and one day I even came on a motorbike.

Although the function had been a total surprise to her and the best-kept secret in Waikaka, she said it was lovely the school had done it for her.

Board of Trustees chairman David Smith said the board wanted to thank Mrs Ryan for the ‘‘quite unique skills'' she brought to the new entrants.

‘‘She settles their fears and creates the right atmosphere for learning.

‘‘Everyone at this school liked being in Mrs Ryan's class,'' he said.

Mr Smith said Mrs Ryan's work with the junior sports day and as a board member in years past had been ‘‘invaluable''.

‘‘I had 14 wonderful years as a friend and co-worker, here at Waikaka, with her,'' he said.

A surprise visitor at the function was Mrs Ryan's first principal at Waikaka, 30 years ago, Ian Ballantyne, who had flown down from Otaki, in the North Island, for the Gore High School reunion at the weekend.

‘‘Aileen is just a wonderful teacher, who has wonderful empathy for the children.

Mrs Ryan said she had kept in touch with Mr Ballantyne over the years, but had no idea he was coming to see her on the day.

‘‘Aileen's love of teaching and of the children is what keeps her looking so young,'' said Waikaka School acting principal Dianne Smillie.

Mrs Ryan said it was ‘‘just wonderful'' that all these people had paid her the compliment of coming to celebrate this special day with her.

She said she had even brought her own daughter out to Waikaka with her every day, for her schooling.

‘‘She had a lovely time out here and got a great education.''

‘‘There is something quite special about a rural education and a rural school,'' she said.