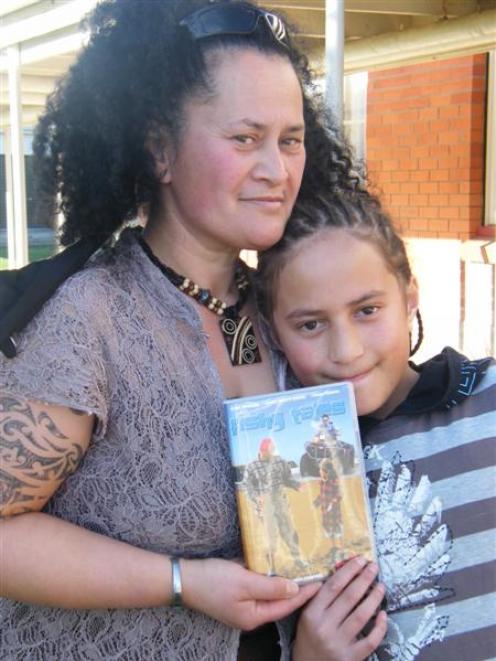 Kerry Matahiki and her son Tiarete Wanahi celebrate after watching Tiarete act in his first short film.
Tiarete Wanahi has been on the ride of his life since being chosen as the main child star in a short film produced by a Wanaka production house.

Mr Simmonds said on Saturday, at a special screening of the movie at the Mataura School, Tiarete impressed him from the first moment he saw him.

‘‘He [Tiarete] was amazing,'' Mr Simmonds said.
This was the first short film Mr Simmonds had made.
Tiarete said making the movie was ‘‘cool''.

However, he admitted it was hard to learn the lines.

When asked why he thought he was chosen for the film Tiarete agreed it was probably his good looks that secured him the part.

Tiarete said after his first taste of acting he wanted to continue and would like to become an actor.

The 12-minute film, which debuted in Dunedin recently, was about a grandfather (played by Cyril Gilford) and his grandson Riwi (played by Tiarete) who were caught illegally fishing and how they outsmarted the fisheries officer who was in hot pursuit.

The movie starts with whanau gathered around a campfire and grandad telling a tall tale.

The tale is told through the eyes of the grandfather and features a series of flashbacks to the comic cat and mouse battle between the fisheries officer and the guilty pair of Grandad and Riwi after they were spotted taking crayfish.

The movie was shot at spots along the south coast including Cosy Nook and Dummies Beach.