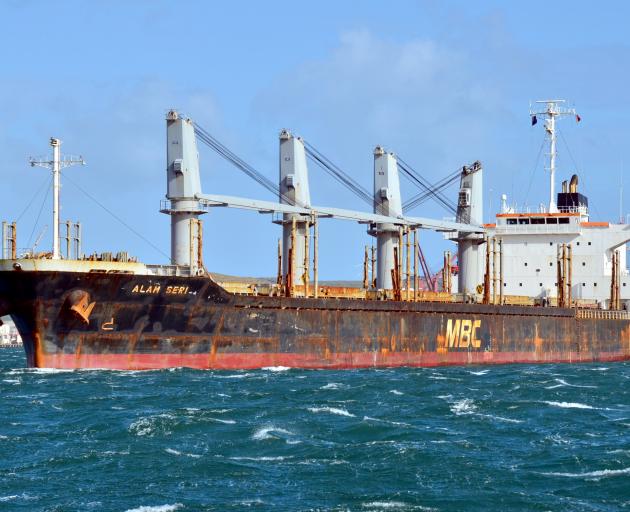 The bulk carrier Alam Seri (pictured in 2017) was entering Bluff Harbour in 2018 when it drifted off course, damaging two tug boats as well as the ship itself. PHOTO: SUPPLIED
South Port has changed the way it trains staff after an incident in Bluff Harbour in which three vessels were damaged.

The Transport Accident Investigation Commission made its investigation into an incident in 2018 in which the bulk carrier Alam Seri ran into trouble as it attempted to enter the Bluff Harbour, resulting in damage to two tug boats and the ship itself.

The report found lessons learned from the incident included manoeuvring actions and outcomes should be discussed during the master-pilot exchange and the bridge team should agree on defined parameters for monitoring and initiating a challenge.

"When safety-critical equipment, such as an anchor, is required to be available for immediate use in the event of an emergency, any factors affecting its immediate use should be communicated and discussed during the master-pilot exchange."

The commission recommended South Port ensure its pilots meet the requirements for training and proficiency requirements in accordance with the South Port Pilot and Tugmaster Training Manual and as required by Maritime Rules.

South Port accepted the commission's recommendation and all training requirements were now recorded and managed in the company’s training management system.

On the day of the incident the ship was entering Bluff during a strong east-southeasterly wind under the conduct of a harbour pilot.

However, the vessel began to veer off course, despite the helmsman applying full port rudder.

The pilot ordered the engine speed to be increased and called for early assistance from two harbour tugs that were waiting to assist.

The pilot then ordered the engine to be set to full astern and asked the crew to deploy both anchors.

The crew were not able to deploy either anchor in time.

The ship was brought under control but not before making contact with the seabed; both tugs were damaged during the event.

The underwater hull of Alam Seri suffered paint abrasion, and the hull was damaged above the waterline as a result of contact with one of the tugs.

The report found the delayed deployment of the anchors probably resulted in the vessel not stopping as soon as it could have.

It was, however, uncertain whether the anchors would have prevented the ship from contacting the seabed if they were deployed when ordered.