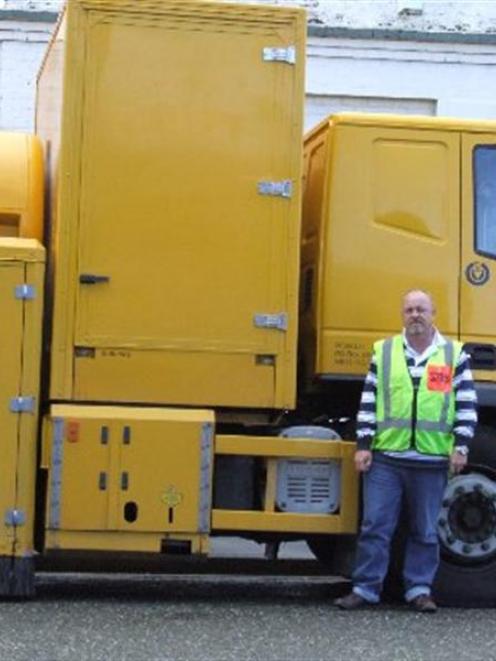 Road expert: WDM operations manager Nigel Scott was in Gore last week with the one-of-a-kind British sideways co-efficient investigation machine, making sure roads in the area were up to scratch.
A one-of-a-kind British sideways co-efficient investigation machine (Scrim) has been trawling the roads in Southland ensuring they are safe for motorists.

The huge machine, owned by Bristol-based company WDM, was shipped to New Zealand once a year to carry out highly specialised inspections of state highways to ensure they met national standards, operations manager Nigel Scott said.

The Scrim spends about seven months in New Zealand, as does Mr Scott.

Mr Scott is a hotel dweller for half of the year and does eight long-haul flights a year - and has done so for 11 years. He described his job of 19 years as ‘‘very specialised''. He carries out work for the national roading network as well as for local authorities.

‘‘The main function of the machine is to measure the friction of the road surface for braking,'' he said.

‘‘When there are serious brake issues, it can be nipped in the bud very quickly,'' he said.

The machine carried out skid testing as well as measuring contour, and calibrated all at high speed. Scrim travelled at 80kmh and could test up to 50km of roading a day, he said.

The main emphasis was on maintaining safety and pinpointing trouble spots. The highly technical gauging of exact points on the road that needed maintenance helped roading authorities to save money, he said.

‘‘I get quite a lot of satisfaction out of it when we are actually saving lives,'' he said.

The information gathered by Scrim is sent via satellite to local authorities, so roading staff at councils can see what condition their roads are in from their desks.

When asked how much Scrim was worth, Mr Scott said ‘‘an obscene amount of money'' - in the millions of dollars.

However, it was money well spent because, during the 11 years he had been using the machine, there had been a dramatic improvement in the roading network, he said.

Mr Scott said he had been to most places in New Zealand and could write a travel guide.