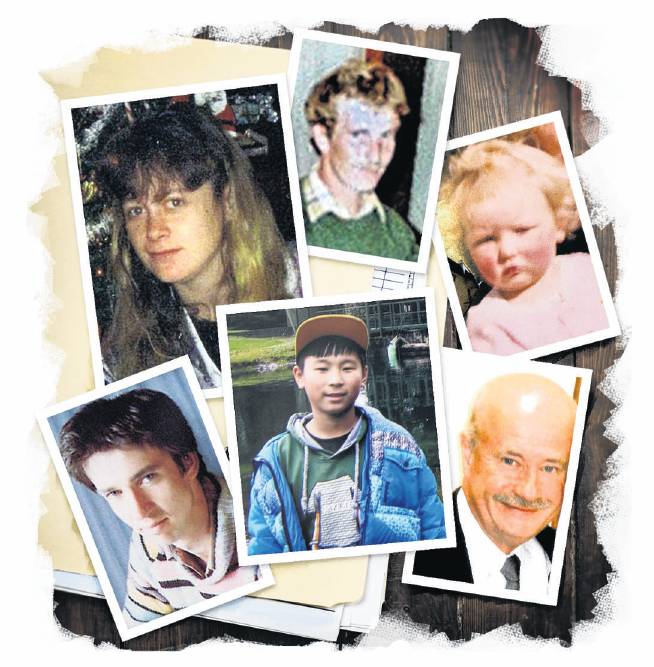 Still missing . . . (Back from left) Tuitania Barclay, Timothy Pridding and Amber-Lee Cruickshank, and (front) Peter Coop, Mike Zhao-Beckenridge and John Beckenridge. These six missing people have a higher profile, but are among 67 southern souls that remain unfound. PHOTOS: ODT FILES
When it comes to missing people, some end up becoming more high-profile than others.

It happens for a variety of reasons — maybe the person is well known, or their family continues to highlight the case in the media.

In the South, there are names that, even decades after their disappearance, are still ingrained in the public consciousness.

The 2-year-old was last seen on October 17, 1992 at Kingston, a small town at the southern end of Lake Wakatipu.

Despite exhaustive searches, there has been no sign of her in almost three decades.

The case hit the headlines again this month when police offered a $100,000 reward and immunity from prosecution for information.

More recently, and further south, was the mysterious case of the Beckenridges.

In March 2015, John Beckenridge picked up his stepson, Mike Zhao-Beckenridge, from an Invercargill school, breaking a court order, and vanished.

Beckenridge's car was later found in the surf off the Southland coast, but there was no sign of their bodies.

She left behind all her possessions, and there was no suicide note.

Her fiance reported her missing five months after she reportedly left him, and police believed she was the victim of foul play.

Her body has never been found.

In some cases, new information comes to light decades after they go missing.

Auckland doctor Peter Coop disappeared while in Dunedin on a month-long course in June 1989.

In the decades since, there have been multiple sightings of him in both New Zealand and Australia.

But for others, their close family members die without answers.

After no sightings of him for eight years, a coronial hearing in 2003 concluded he was dead.

Police have long believed his death was a result of foul play.

Both of his parents have since died without knowing what happened to their beloved son.