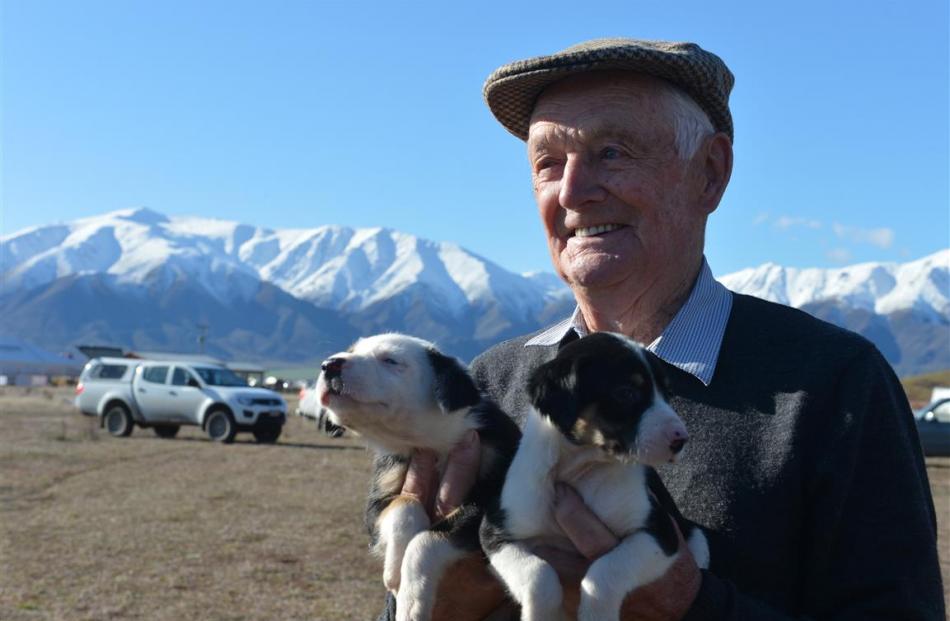 Mandeville dog triallist Les Roughan holds pups out of his bitch Flirt, who is competing at the sheep dog trial championships at Omarama. Photo: Stephen Jaquiery

Les Roughan has the distinction of being the oldest competitor at this year's South Island and New Zealand sheepdog trial championships at Omarama.

Last year, the 92-year-old could have claimed another milestone, as one of the more senior Kiwis to undergo open-heart surgery. But he turned it down in favour of a heart valve.

"I wouldn't have it. They said 'why?'. I said ... it would be six months away from my dogs. When I was fit to go back to them, they wouldn't know me and I wouldn't know them.

"I flew to Christchurch on Monday, had a heart operation on Tuesday and flew back home on Friday,'' he said.

Retirement was not on the horizon for the sprightly Mandeville farmer as long as he kept his driver's licence and was able to attend trials, he said.

Mr Roughan still lives on a farm at Gore, now owned by his son Barry, and still does stock work. "I'm very lucky; I get all the good jobs,'' he said, laughing.

He has a team of four dogs on the farm, including Flirt, whom he is campaigning at this year's championships. He rated Flirt as the best dog he had for both farm work and dog trials.

At Omarama, he had some extra passengers in the back of the ute - Flirt's second litter of pups. All have been sold.

He was not keeping any as he already had a young half-trained dog at home and feared he would spoil a pup if he kept it.

Mr Roughan has missed only three New Zealand championships since 1982. In 1984, he qualified four dogs but one of his sons was killed in an accident shortly before the event. On another occasion, he was attending a wedding in Ireland.

He loved watching his dogs improve and enjoyed the fellowship of the sport.

Mr Roughan took a philosophical approach to the competitive side of dog trials.