By Tim Miller
0 Comments
Wanaka is set to be home to a slice of New Zealand’s aviation history.

A group of aviation enthusiasts  hopes to bring five  historical airliners back to New Zealand to restore  and display at the National Transport and Toy Museum in Wanaka.

Each was the last remaining example of its  type, which originally flew in New Zealand.

The group,  called  Bring Our Birds Home,  was in the process of securing money and support for the plan.

Campaign head  Paul Brennan  said Wanaka and the museum were an ideal location for the five "birds".

"The land is there, the museum is already up and running and has got a good trade going, it’s a fantastic tourist area, so it all sort of points to that."

One of the airliners,  the DC-8 (ZK-NZC),  was close to being confirmed as the first of the five to be secured for repatriation. At present it was lying derelict in the corner of the Manaus airfield in Brazil on the edge of the Amazon River.

A Givealittle campaign had been launched with the hope of raising about $50,000 in the next four weeks. The money would cover the purchase of the airliner, a full inspection and audit of its frame and any other costs that came up, Mr Brennan said.

"It’s been sitting in an airfield in Brazil for 14 years so if we don’t act now it will be gone forever."

A Douglas DC8 which was once part of the Air New Zealand fleet now lies derelict in the corner of the Manaus airfield in Brazil on the edge of the Amazon River. Photo: supplied
One of the other aircraft, the DC-10,  was  lying derelict on a Cuban airfield and  needed to be secured soon  or it would be used for scrap metal, he said.

The other three  planes were  still  airworthy. The campaign had first right of refusal so an offer could be made once their service life had finished.

Ideally, at least three of the airliners would be housed and on display in Wanaka within the next three or four years,  he said.

"As an attraction it would be one of the top aviation  museums in the southern hemisphere."

Mr Brennan likened the airliners to  original Maori waka, because of their importance in opening New Zealand  to the rest of the world.

National Transport and Toy Museum curator Jason Rhodes said the prospect of housing the five airliners was exciting  for Wanaka  and the  country. 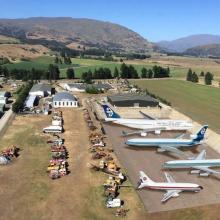 An artist’s impression of former Air New Zealand, NAC and Teal airliners on display in Wanaka. Image: Supplied
"We’ve been trying to get some of the original fleet so we can put them in the original livery because they are a tangible part of New Zealand’s history."

How the aircraft would be stored and displayed still needed to be worked out.

"I think the first job is to get these airliners back here and then  assess  each stage, but we’ve got plenty of room here to house these large aircraft."

It was also too early to know how much it would all cost but Mr Rhodes expected there would be many hours of volunteer work needed to  return the planes to their former glory.

"It’s significant in almost every way and it’s not going to  be an easy task which is why we’re going to be calling on the public to chip in anyway they can."