It is not often talked about, but Sir Edmund Hillary did not climb the whole height of Mt Everest — just the last 7432 vertical metres.

For the first 1400m to Khatmandhu he took a plane.

There was no such luxury for Steve Moffatt, of Christchurch, who on Thursday did the whole nine yards: 8843 vertical metres — the difference in altitude between sea level and the top of Mt Everest.

The other difference was he did it on his bike, on a steep hill on State Highway 6 on the northern side of the Lake Hawea lookout. 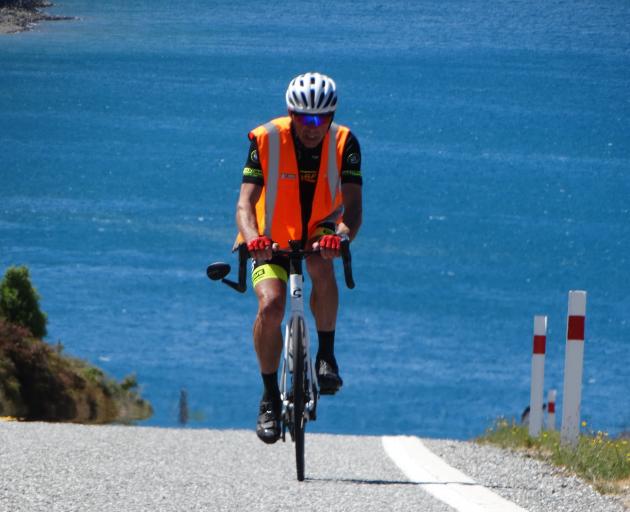 Steve Moffatt (70) heads for the summit on his bike. PHOTO: MARK PRICE

His daughter Jessy said he "unravelled" his tired body from his bike late on Thursday night and celebrated with his family, friends and a glass of champagne.

Asked if he thought he might be getting too old for such ventures, Mr Moffatt said it did cross his mind from time to time.

"But while I can, I bloody well will."

He hoped through sponsorship to raise $100,000 for the Christchurch City Mission and the Aspiring Youth Development Trust.

The trust helps encourage young people from east Christchurch to compete in the Coast-to-Coast race.

The Everest challenge has been completed by 6000 people, but only one other over 70.

Mr Moffatt’s family — wife Barb and daughters Jessy and Emily — were the support crew and would be doing the paperwork to get his effort recognised by the Guinness Book of Records.

In 2010, Mr Moffatt climbed
as far as Summit Rocks on Mt Cook with the equipment and clothing of the 1890s, and suffered frostbite and hypothermia as a result.