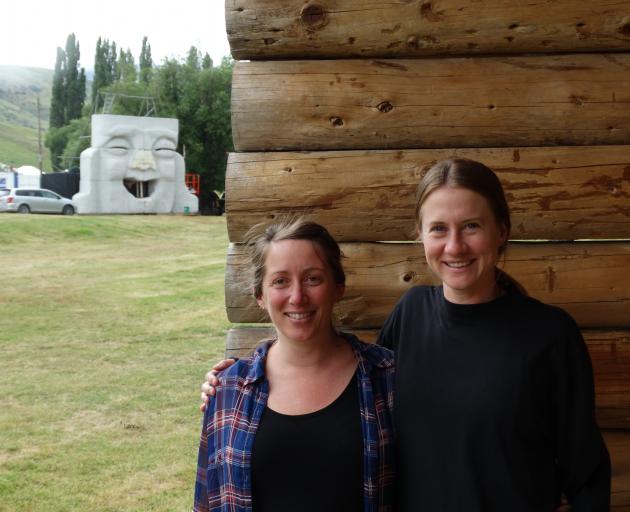 Transforming a farm into the venue of an international music festival is no easy task, but it is a job that both Rhythm & Alps event managers Ralphie Kirby-Crowe (left) and Fiona McMartin love. PHOTO: SEAN NUGENT
Cardrona Valley's Rhythm & Alps has become a staple in the summer calendar for thousands around the country.

The event is one of the biggest international music festivals in the South Island.

For the past two months event managers Fiona McMartin and Ralphie Kirby-Crowe have been busy with their familiar site crew turning the operational farm of Robrosa Station into the site set to host 10,000 revellers this weekend.

It is hardly glamorous stuff.

Much of the work is filling rabbit holes, putting up fencing and organising the distribution of portaloos, but the end goal is what is most important- making sure people have a damn good time.

"Some of the things we do to improve people's experience they shouldn't notice. That will mean we've done a good job," Ms Kirby-Crowe said.

The duo are running their fourth Rhythm & Alps festival, and they said consistency was the key to success.

"I think because we have a really stable, well-seasoned crew makes it easier to roll everything out than it would be if we were transient staff," Ms Kirby-Crowe said.

"Having that consistency allows us to improve year on year rather than having to start from scratch each year, which I think is a real strength of the festival."

The festival is expected to sell out - 10,000 ticket holders are due to arrive over the course of the three days However, there are no plans for it to expand in the future.

"We're never going to blow up numbers. We want to keep it personalised and make people feel like they had a damn good time and was worth every penny."

Rhythm & Alps begins today and will run until January 1.

Californian rapper Vince Staples is a curious choice of headliner but is bound to give an absorbing performance when he hits the stage tomorrow night.

His most recent albums FM! and Big Fish Theory were very club-centric and he has laced his shrewd raps over woozy low-end production since 2015 debut Summertime 06 which could ignite R&A into a rumbling frenzy.

If one act is to prove a departure from Rhythm and Alps' mode of heaving club music, Orchestra of Spheres is the ticket.

The Wellington ensemble which features former TrinityRoots drummer Riki Gooch are experimental in both music and aesthetic - as they perform clad in vibrant costumes and tinkering with a range of percussive instrumentation.

George Evelyn aka Nightmares on Wax takes to the decks tomorrow - no-one will assemble a more eclectic set than the Leeds veteran.

After 30 years, Evelyn is a prolific producer and selector and will undoubtedly weave everything from funk, reggae, disco or anything with a dynamic bassline into the ultimate party.

Damon Riddick aka Dam-Funk will offer up a dazzling slice of Californian boogie.

For the past decade, he has been reviving classic late-'70s funk and collaborated with Snoop Dogg and Kiwi expat Mark de Clive-Lowe.

With keytar in hand, he'll blur the line between retro and futuristic.

R&A lives and breathes drum and bass, but there are no acts more respected than pioneering force LTJ Bukem. As the head honcho of record label Good Looking Records, Bukem spearheaded a smoother and jazzy take on jungle culture in the 1990s.

He will be joined at the mic by local d&b figure MC Tali for a set of silky smooth breakbeats.