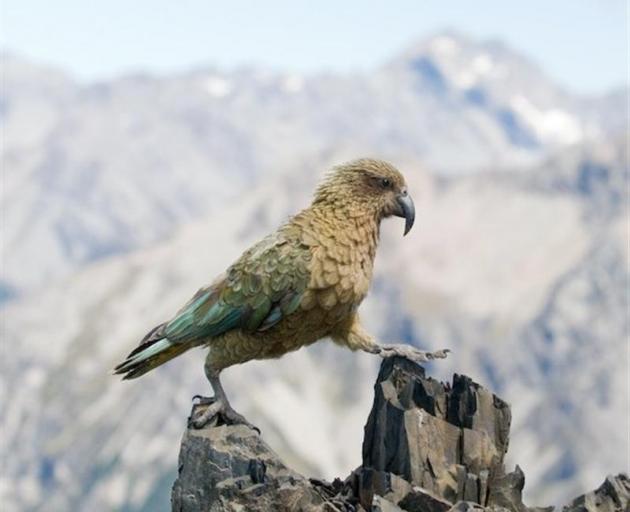 A kea on Avalanche Peak in Arthur's Pass. Photo: Andrew Walmsley
A Massey University post mortem has found six kea in the Matukituki Valley of the Aspiring National Park ''are likely'' to have died from 1080 toxin.

The birds were among the 12 kea monitored by the Kea Conservation Trust after the Department of Conservation's aerial 1080 predator control operation on February 11.

DOC threats director Amber Bill said in a statement today it was ''regretful'' to lose any kea to 1080.

''It’s upsetting and disappointing to lose six kea but we are confident with effective control of rats and stoats we will significantly boost nesting success and the number of young birds entering the population.

''We are concerned the tracked kea may have learnt to eat human food around the tramping huts, making them more likely to try 1080 cereal bait.

''DOC’s extensive research of kea through aerial 1080 operations show the risk of 1080 to kea in remote areas is very low but increases markedly with birds that have learnt to scrounge for human food.”

''We are constantly working to improve our risk mitigation standards for kea, which are informed by our ongoing research programme.

''In light of this incident, we will be investing more to explore potential additional measures that DOC can take to reduce the risk to kea in future 1080 predator control operations.”

Ms Bill said DOC was considering a campaign to discourage people from feeding kea and prevent kea from learning to scrounge.

''We need to continue to learn and assess all options to protect this national taonga from predators and other threats.”

The Matukituki programme was designed to protect rock wren, kea and whio, as well as kākāriki, kākā, and South Island robin following a beech mast-fueled rat and stoat plague.

Ms Bill said DOC was monitoring whio and rock wren to track how these species were doing.

So after losing nearly 50% of the monitored birds DOC turns around and suggests the public may be to blame for feeding Kea and thus encouraging them to scrounge for food and hence increasing the likelyhood of them eating 1080 pellets.!
No mention of secondary poisoning by eating the poisoned rats or stoats.
How about just owning up to the fact that any poison kills anything that eats it and the birds dont know its poisonous.? And who spread the poison.. Not us trampers.
Shame on you DOC.

Yes I do agree with DOC threats director Amber Bill when said in a statement today it was ''regretful'' to lose any kea to 1080, then also stating the "Kea may have learnt to eat human food around the tramping huts, making them more likely to try 1080 cereal bait" This trying to shift the blame of the Kea's death off DoC and onto others is most concerning and disgusting. DoC's laying of 1080 caused their death so then the blame can only be contributed to and laid fairly and squarely at the feet of DoC --- How much longer will DoC keep killing "our" wildlife,when will they be satisfied, when are all gone or what? --- How much longer will DoC feed this spin to the people of NZ that 1080 is the the safe toxin and believe it is not their fault when it kills everything else in its wake..

Typical DoC.
'We are constantly working to improve our risk mitigation standards for kea, which are informed by our ongoing research programme.'
60 plus bloody years of killing Kea and there are very few remaining but throws it's PR at this again.
Kea will eat a sweet high energy pallet with or without public feeding them. They are smart, a hell of a lot smarter than DoC and their poison everything policy.