The health of Upper Clutha lakes and rivers continues to be of concern and local community groups are coming together to form a long-term plan to maintain and improve freshwater quality in the district.

The merger will be effective from Monday.

Trust chairman Russell McGeorge said the two groups shared similar objectives and goals and the merger would strengthen both sides.

The merger came at the same time another community group, Shaping Our Future, began a process its executive, Anita Golden, hoped would set a future water quality goal that the whole Upper Clutha community could work towards. 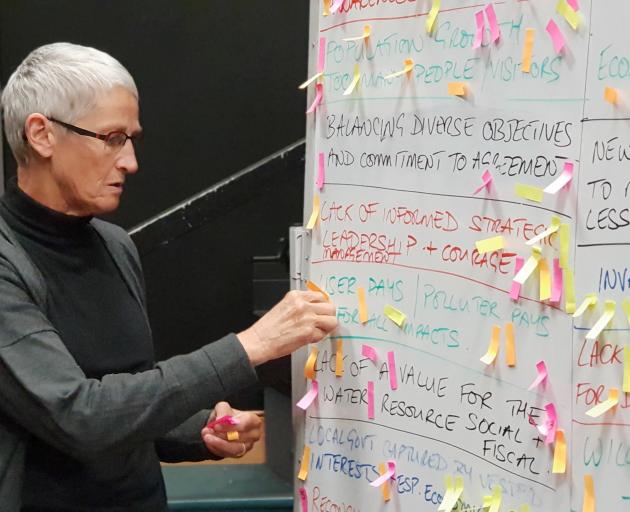 Ruth Harrison outlines what she believes is one of the biggest issues facing Upper Clutha waterways, at the Shaping Our Future water forum held in Wanaka on Tuesday. PHOTO: SEAN NUGENT
This week the group held water forums in Queenstown and Wanaka to gauge what both communities felt were the greatest issues facing waterways in the district and what needed to happen to ensure the water was of "exceptional quality" in the future.

Ms Golden said issues many outlined at the forums were pollution, education, strategic management and leadership.

From the information garnered at the forum, Ms Golden said a task force would create a report that would include recommendations for councils, the community and stakeholders such as Fish & Game, to "set us all in the right direction towards a long-term goal".

The report will go back to a public forum around October or November this year before any recommendations are made.

Ms Golden said while the process could be a long one, the ultimate goal was to get "everyone in our community heading in the same direction".

"People can be working on different projects, different pathways, but if everyone has that same end goal in sight then it means that everyone is working together."

"People working together is a lot stronger and can enact more change, quicker than people working individually or in small groups."