Long wait for road sealing far from over 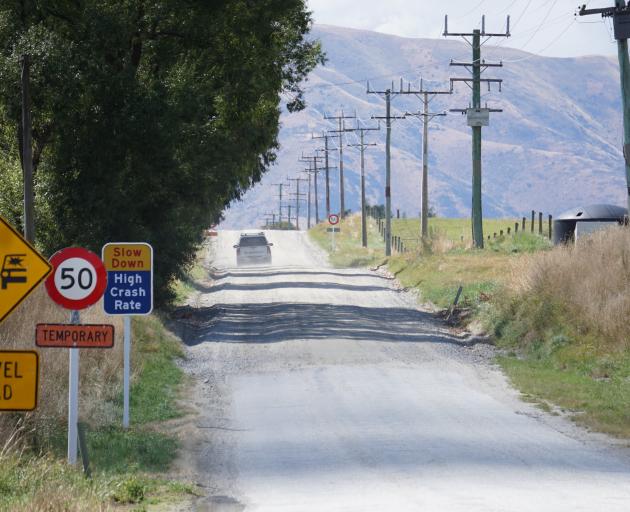 Despite several crashes in recent years, it is likely to still be some time before Ballantyne Rd is sealed. PHOTO: SEAN NUGENT
The long process towards fully sealing Ballantyne Rd, in Wanaka, is slowly making headway.

It has been the best part of two years since the Queenstown Lakes District Council began working on getting the 4km stretch of road fully sealed.

At least 14 accidents have occurred on the road in the past five years, including a fatal one in October 2016.

It has been a frustrating time for Mt Barker residents, who have been calling for an upgrade for years.

At the recent Mount Barker Residents Association annual meeting, residents were told by deputy mayor Calum MacLeod the road would be sealed "within five years".

"It was meant to be [sealed in] November last year."

However, Mr MacLeod told the Otago Daily Times on Wednesday that five years was a conservative estimate and it would probably be completed in a 12 to 18-month timeframe.

Last year, the council was preparing a detailed business case to go to the NZ Transport Agency for half of the estimated $3 million to $5 million cost of upgrading the road.

Mr MacLeod said that case had been submitted and NZTA had responded.

He said the NZTA would not fund a scenario in which the road was levelled, sealed and turned into a 80kmh road, but would fund at least 50% of a sealed 60kmh road with no topographical changes.

He was pushing for the inclusion of a metre-wide separated active transport lane as part of the upgrade.

Although the process was taking some time, he said that was often the case when it came to securing public funds.

"It takes a long time, but our biggest failure would be if we stopped trying."