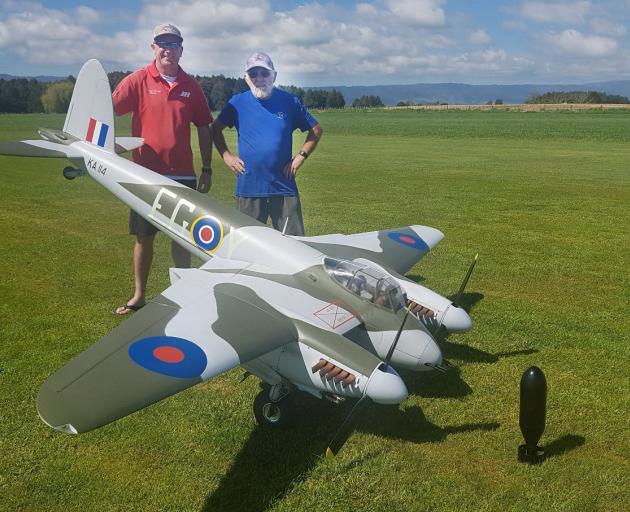 The Mosquito model aircraft will be flown at Wanaka by Frazer Briggs with his father Mike (right) acting as bombardier, in charge of the transmitter which will open the doors and release the bomb. PHOTO: SUPPLIED
Warbirds Over Wanaka have dropped a "bombshell" with the announcement that a Mosquito fighter bomber model aircraft will drop a replica bomb at the international airshow at Easter next year.

The model was built by Mike Briggs and is one-fifth the size of the real thing.

He said it has a 3.2m wingspan, weighs 25kg, is powered by two 60cc 2-stroke engines and has a bomb bay which can be remotely opened to release a "bomb".

Mr Briggs started work on the model after watching the test flight of the first actual Mosquito aircraft to be completed by aircraft restorer Avspecs at Ardmore Airport in Auckland in 2012.

Warbirds Over Wanaka event manager Mandy Deans said the model Mosquito would be flown at the airshow by Mr Briggs' son Frazer, and his father would act as "bombardier", in charge of the transmitter which would open the doors and release the bomb.

They had their first bomb drop test recently and said it went well.

"We'll be perfecting the display over the next wee while and we're sure the Wanaka crowd are going to really enjoy the display," Mr Briggs sen said.

The Mosquito aircraft was designed by Sir Geoffrey de Havilland and was one of the fastest operational aircraft in the world when it entered service in 1941.

The Warbirds Over Wanaka International Airshow is being held at Wanaka Airport on April 10, 11 and 12 next year.