The sense of community and historical significance was almost palpable at the opening of the Musterers Hut on Saturday.

Dozens hiked and skied 4.7km to the official opening at Snow Farm’s new 36-bed hut this weekend. The crowd was reflective of the community, who over several years have banded together to raise more than $750,000 to build in the high alpine terrain.

Official proceedings began at noon with a mihi whakatau by Ngai Tahu kaumatua Darren Rewi, who highlighted the historical significance and context of the local area.

He was followed by Snow Farm trust chairman Samuel "Q" Belk, building partner Peter Breen and former prime minister Helen Clark, who has been a Snow Farm patron since the trust was formed in 2009.

Snow Farm general manager Sam Lee credited the tenacity of his mother, Mary Lee, who pushed for the establishment of Snow Farm, and said he looked forward to the future of the ski area.

"We’ve got a building to build and it’s going to be an important step for us as a cross-country skiing community to have our own building and space that’s purpose-built," Mr Lee said.

Snow Farm is a not-for-profit organisation owned by the Pisa Alpine Charitable Trust.

In October, the ski area will be required to leave its current base building and hand the premises back to the building owners and neighbouring business Southern Hemisphere Proving Ground.

In order to build a new base area more than $1.7million will be needed, and Snow Farm is seeking financial help from funding partners and charitable foundations.

The Pisa Alpine Charitable Trust is close to lodging its resource consent application for the new building, which is intended to be built in two stages — stage one being set to cost $900,000 and stage two $800,000.

"We need to start building in October and to complete stage one over summer so we are ready to go for winter 2023. We can’t not have a base facility. We are at a critical point in the Snow Farm’s history and we need as much help as we can get," Mr Belk said. 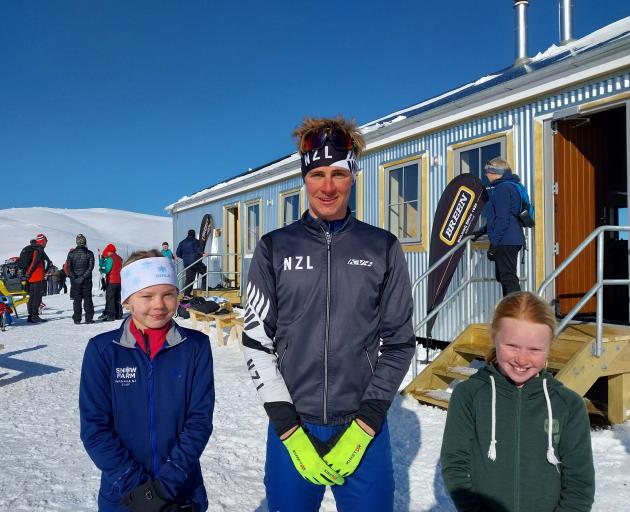 Joining dozens at the official opening of the Musterers Hut at Snow Farm yesterday were (from left) Elli Kiuiu, Olympian Campbell Wright and Anika Viitikaagas. PHOTO: ASPEN BRUCE
The Musterers Hut project was an example of the impact of funded support, the project having been financed entirely by community grants and volunteer support, he said.

The hut was designed primarily with a future focus to be used for schools and community groups.

Ten-year-old Elli Kiuiu, who has been Nordic skiing for the past three years, said she had noticed an increase in children getting involved in the sport.

"I’ve met a lot of my friends up here and they really enjoy it," she said.

The night before the official proceedings, Elli spent the evening in the hut along with other members of the Waiorau Nordic Sports Club.

"It was really fun — we had a lot of marshmallows and went to bed late. There were quite a few people staying, mostly the people from the club setting it up. It was really warm — I think it’s even better than the Meadow Hut," Elli said.

The hut is situated in Tranquillity Basin, 4.7km from the current Snow Farm base building via the River Run trail.