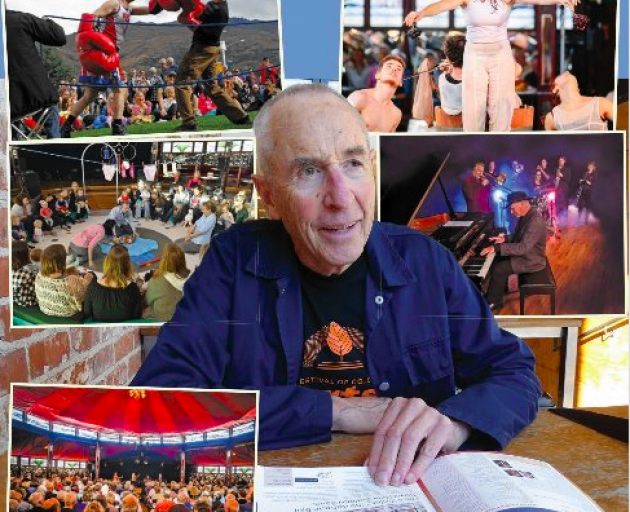 While fondly recalling memories of previous events, Festival of Colour director Philip Tremewan is stepping down after 16 years in charge and is looking forward to working on other projects — but will still retain an involvement with the arts.PHOTOS: KERRIE WATERWORTH/ODT FILES
The outgoing Festival of Colour director is calling for a performing arts centre in Wanaka so large theatre shows can be part of future events.

Philip Tremewan (72) has programmed every Festival of Colour arts festival, as well as the off-year Aspiring Conversations ideas festival, since 2005.

He said circuses, operas, and big dance shows could have been on the programme if he was not "constrained" by the size of the main venue.

"The festival cannot bring in big shows at the moment and we cannot bring in any circus shows because they would knock their heads on the ceiling of the Lake Wanaka Centre."

Mr Tremewan said the next step up for Wanaka was a performing arts centre, and he would be making a submission to the Queenstown Lakes District Council’s 10-year plan on the issue.

"As I read it they have set aside $52million for an arts centre in Queenstown, so we are going to say to them Blenheim built a centre for $27million which has big big theatre, fly tower and a black box theatre.

"Why don’t you split that $52 million and give half to Wanaka and half to Queenstown that would give Wanaka exactly what it needs."

Mr Tremewan was head-hunted to become the festival’s director after working as the visual arts director for the Festival of Wellington and the director of the Festivals of Taupo and Tauranga.

Born in Wellington and educated in Christchurch, Mr Tremewan studied English and theology at Cambridge University in England with the original intention of becoming an Anglican priest.

He said within a few months he realised religion was not the answer; "it is not even the question".

Mr Tremewan taught English for a year in Egypt and a year in the east end of London before returning to New Zealand and becoming involved in the arts.

"It is so interesting because you are grappling with all the important stuff that actually makes you human — what is special about relationships, where is beauty, where is truth, also where is ugliness and where is darkness?"

"You deal with all of that through the arts, you don’t need someone up in the sky to tell you about it, we work it out ourselves," he said.

He said festivals were a real source of joy because it allowed him to work with artists, the community and with different stakeholders.

The job of a festival director was complex as it involved putting together a programme with a strong core that reached a lot of people and pushed a lot of boundaries, as well as allowing for a degree of community participation.

He measured the success of a show by the intake of breath, the silence at the end of the performance and the applause.

"I get excited when performers connect with the audience and the electricity flows.

"That is when things are working and it can be in a music performance — we had a singer from Iceland last time, a solo performance, and you could have heard a pin drop."

Mr Tremewan said he would programme the next Aspiring Conversations so there was a proper succession strategy.

"I am really delighted that Sophie [Kelly] has picked up the role of festival director for the 2023 Festival of Colour because she is a colleague from way back and will be a delight."

He planned to continue living in Wellington and stay involved in the arts, but he would also work on climate change.

"Kids are leading the way with their Friday climate strikes ... how come we have left it to teenagers to lead on this issue when we have been responsible for the mess the world is in?"

Mr Tremewan said there were still tickets available for some shows through out the week.