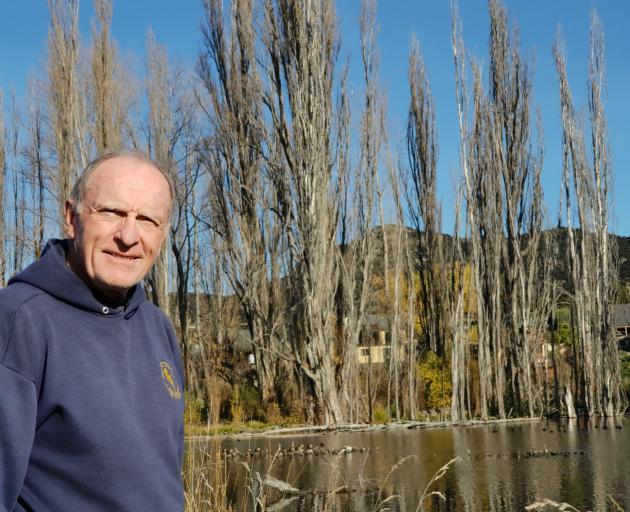 He and other association committee members are pleading for the Queenstown Lakes District Council, which manages the lagoon and surrounding reserve, to put an annual sum of $10,000 towards its restoration as part of the parks and reserves budget in the upcoming 10-year plan.

About a decade ago, the council undertook a project to remove weeds such as gorse and broom that littered the area, and built a walking track through the reserve from Alison Ave to Lagoon Ave.

Since then, the lagoon had attracted a large amount of bird life, which included several species of duck, white-faced herons and pukeko.

However, Mr Cowie believed more work was needed, such as the removal of dying poplar trees and crack willow.

He attributed the ill health of the trees to the lagoon's constant water level, which had received consistent drainage of water from the artificial wetland in nearby subdivision Riverside Park.

Mr Cowie said before the development of the artificial wetland, the lagoon's water level had a history of "dramatic change".

While the consistent water level had been "positive for bird life and the health of the lagoon" it meant the poplars were "drowning".

"They're starting to look ugly and fall over in the wind. We got a quote to start cutting those down and it's about $10,000."

Native planting would replace the trees, while the planting of a community orchard in the reserve would begin in the upcoming spring, he said.

The restoration of the lagoon was the main project for the association for the next 10 years.

"It's a very important, precious and iconic wetland right in the middle of town.

"It could be a place people can go to relax in an environment of native plantings."

It would be an ecological, conservational and recreational asset, Mr Cowie said.