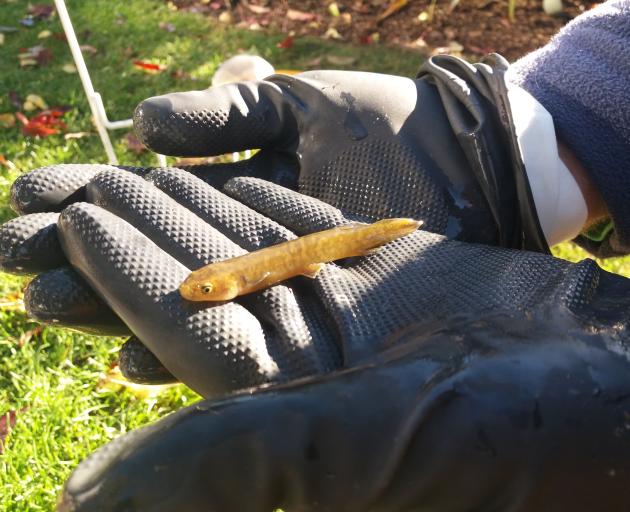 A rare koaro native galaxiid found during a fish survey in Wanaka's Bullock Creek recently. Photo: Laura Catalan
A recent fish survey has given further impetus to a project to assess and conserve Wanaka's urban waterways.

The survey was conducted in Bullock Creek by members of Fish & Game Otago and the Upper Clutha Lakes Trust as part of the Wanaka Urban Streams study.

A wider water quality study was announced last week and will examine stormwater flowing into Lake Wanaka from the township.

Fish survey spokesman Paul van Klink, of Fish & Game Otago, said the exercise had yielded more than 100 fish, which were caught, measured and released along two separate 100m sections of the creek.

Among them were 70 brown trout ranging from 5cm to 48cm, 28 rainbow trout from 5cm to 54cm, and two native koaro (Galaxias brevipinnis), both about 8cm in length.

The koaro is a threatened species and is ranked as declining. Although it has not been recorded in Bullock Creek before, it has been found in other inflowing tributaries of Lake Wanaka.

''A high number of juvenile brown and rainbow trout in both the upper and lower sections confirms the importance of Bullock Creek as a nursery stream for the Lake Wanaka catchment,'' Mr van Klink said.

''This is one of only a few spring creeks in the Central Otago region. The survey shows its importance, and the need for it to be protected to support and maintain its freshwater values.''

The Upper Clutha Lakes Trust Wanaka Water Project has more than $385,000 in funding, and is expected to be completed by the end of the year.