Constable Jack McGilbert (right), of the police serious crash unit, marks points in Ballantyne Rd, in Wanaka, as part of an investigation into Monday's fatal crash. Constable Greg Nolet, of Wanaka, controls traffic. Photo by Tim Miller.
The safety of Ballantyne Rd in Wanaka is being raised after a teenager was killed in an car accident on the road.

Jackson James Aitchison (17), died when the car he was driving crashed into a tree in Ballantyne Rd about 5.45pm on Monday. 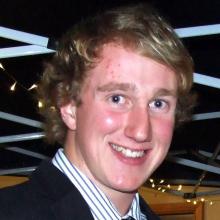 The accident occurred near Morris Rd, just past a point where the road changes from gravel to tarseal.

Emergency services freed Jackson from the car and performed CPR but he died a short time later.

Monday was his final day as a pupil at Mount Aspiring College and he had already been hired by Central Machine Hire.

Jackson, also known as JJ, grew up in Luggate before moving to South Otago but had moved back to the town earlier this year.

He lived with his grandparents, Robert and Carolyn Aitchison. The family did not want to comment when contacted yesterday.

Central Machine Hire owner Allan Dippie said Jackson had worked for the company as a ''workshop boy'' for about three weeks.

He had made a positive impact on the 50 other staff members.

''It wasn't designed for the amount of traffic that goes over it every day now, so it really needs to be looked at.''

Locals have had issues with the safety of the road for some time.

While the road condition might not be the main cause of the crash, it would be a factor, Mr Dippie said.

It was any employer's worst nightmare to hear one of their employees had not made it home safely, he said.

''Jackson was a likeable and cheeky young lad who had a good head on him and he knew where he was going and how he was going to do it.''

The police serious crash unit was at the scene of the accident yesterday.

Earlier this year, the Otago Daily Times reported on concerns locals had about the road after series of accidents, including five in a six-week period.

Senior Sergeant Allan Grindell, of Wanaka, said it could be some time before the cause of the crash was known.

He did not know the official number of accidents on the road, as some were not reported to police, but said there was a history of accidents there.

Police did have some issues with the state of the unsealed sections, he said.

''It is still the responsibility of the driver to drive to the conditions of any road they are on.''

Queenstown Lakes District Council maintained the road and police could only let it know of any issues they came across, he said

''The situation has well and truly been brought to the attention of the council,'' he said.

Council property and infrastructure general manager Peter Hansby said the council knew about the concerns people had about Ballantyne Rd and was looking at the possibility of sealing the unsealed sections of the road.

Temporary speed restrictions of 50kmh had been placed on the unsealed sections since October 3, Mr Hansby said.

Mount Aspiring College principal Wayne Bosley said Jackson was excited about moving on to his next stage in life.

''It's a tragic situation for him and his family and our best wishes and sympathy go out to them,'' Mr Bosley said.