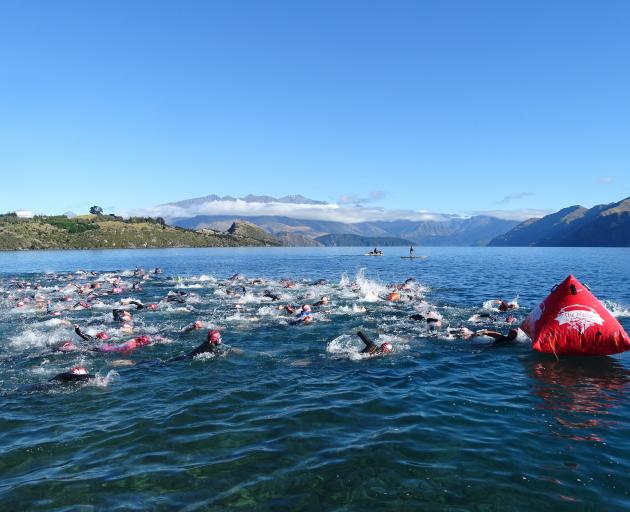 Swimmers compete in the Ruby Swim race in Wanaka early this. Next year’s event has been cancelled because of the uncertainty surrounding Covid-19. PHOTO: ODT FILES
Another sporting event has come up short due to Covid-19.

Wanaka’s Ruby Swim event is the latest event to be cancelled due to the uncertainty around Covid-19 restrictions.

Ruby Swim co-director Eddie Spearing said it was fairer for everyone if the Lake Wanaka open water event was cancelled now, instead of closer to January 29.

The decision to cancel the event was made on Monday because of the uncertain Covid-19 environment.

The annual event usually attracts about 500 swimmers plus a large crowd of spectators.

The races ranged from 10km to 200m. Several were fully subscribed while others were selling well, he said.

Refunds of 50% were now being processed.

Mr Spearing said he had taken the cancellation decision hard and he knew swimmers would too, but the business was starting to incur costs.

Auckland would be getting out of lockdown on December 15, and there were fears more people moving around the country would escalate the spread of the Delta variant.

There was also too much uncertainty around the operation and policing of the Government’s new Covid-19 "traffic system", which comes into effect in December.

Other events were had also been cancelled because of the uncertainty, including the Lake Hayes A&P Show and the Farm Jam.

If there was any money left over after issuing refunds, it would be applied to costs and then to the charities, he said.

The event did not qualify for the Government’s events transition support scheme, which underwrites large scale summer festivals if the Covid-19 pandemic forces cancellation.

Large scale is defined as audiences of 5000 or more, such as Rhythm & Alps music festival or the Gibbston Valley Concert.