0 Comments
Wanaka has been blanketed by a creeping grey fog for more than a week — but the skifields have been bathed in sunshine.

The fog stretched 25km along Cardrona Valley Rd on Saturday, finishing obediently at the stop sign at the bottom of the skifield access road.

Up the mountain, the Cardrona shops, cafes and gondola were open, as the skifield was (sort of) open for business.

Despite the lack of skiable snow, Cardrona skifield workers were delighted when the mountain opened for the season on Saturday. 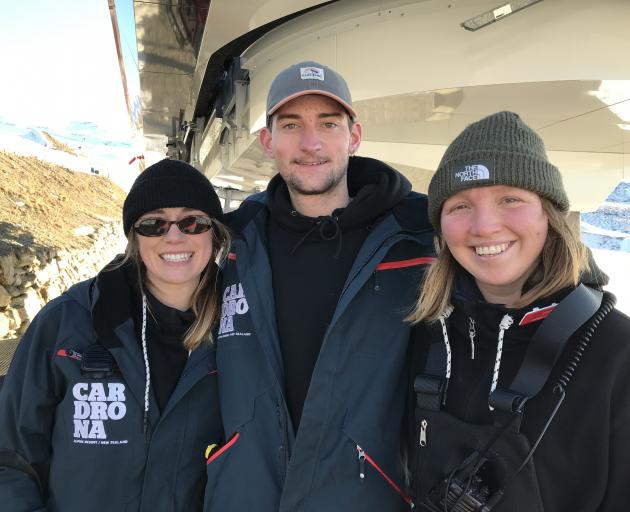 Cardrona lift workers (from left) Hannah Northgraves, Daniel Cowper and Bria Steven stand in sunshine on Saturday. PHOTO: MARJORIE COOK
"It is sort of blocking the sun from reaching the town, so it is good to get up to Cardrona and get some sun and get some vitamin D.

"When you come out of that blueness into the orangeness of the sun, it is great. Yeah, definitely a big change of mood."

General manager Bridget Legnavsky said skifield staff had enjoyed a welcoming powhiri and hangi on the mountain on Friday night.

Saturday’s soft opening for sightseeing allowed staff to have a "dry run" at operations before the weather turned.

It was hoped conditions would be favourable for snowmaking from tomorrow, she said.

The Snow Farm Nordic ski resort also opened on Saturday for sightseeing and a boot sale and will announce its opening for skiing when the snow comes.