Trust seeks to lease and build 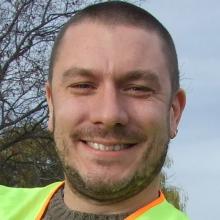 Richard Elvey
Wanaka community trust Kahu Youth is pleading for the council to help it find a new home, as its lease at its Russell St address is set to expire next year.

Youth worker Richard Elvey told the Otago Daily Times the trust had been at its Russell St building for seven years on a temporary basis and was recently told by the landlord it had 18 months to find a new home.

It was "news we all knew was coming", Mr Elvey said, but it provided an opportunity for the group to find somewhere permanent.

Mr Elvey and members of the Upper Clutha Youth Council spoke at last month's Queenstown Lakes District Council meeting in Wanaka, where they proposed to lease an area of land at Lismore Park and build a new youth centre on it.

The proposed area is a patch of reserve land beside the Lismore Bike Park in front of two water towers.

The idea to build was prompted by the ever-increasing rents in Wanaka and the difficulty of finding a landlord willing to have dozens of teenagers in their building.

He said that the proposed location was perfect "because it's in a bit of a no-man's land. It's not anything."

Mr Elvey said about 120 youths used Kahu Youth "one way or another".

A new youth club at Lismore Park would be a "real bonus for the whole community" because the space could be shared with other groups.

"If this all worked out and we got this land leased to us and we got something built for us, we would save a lot of money every year.

"The council fund us the rent and it's $24,500 per year to be here [in Russell St]. That would effectively pay for half a youth worker or we could run most of our projects for the year off that."

Council spokesman Sam White said the council acknowledged the importance of Kahu Youth and would be working alongside the trust to "investigate this proposal further alongside other possible options for a new facility".