Firefighters will continue to control and monitor the perimeter of a 280 hectare Glendhu Bluffs fire site near Lake Wanaka for the rest of this week but now consider the huge blaze mostly contained.

The fire was reported at 1.30pm on Sunday but there were concerns it could flare up during an ongoing period of hot, dry weather.

The massive native vegetation blaze is believed to have started between Mt Aspiring Rd and Emerald Bay.

Fire and Emergency NZ incident controller Jason Sarich of Dunedin said it could be at least a week to complete an investigation into the cause.

There is a fire investigator here and over the next few days to determine the cause, Mr Sarich said.

There appears to be no let up in the hot, dry forecast for the next week and Mr Sarich has cautioned people to check the conditions be fore they undertake outdoor activities.

He has also asked people to keep their drones out of the air and recommended rock climbers stay away from the Hospital Flat rock climbing area for now. 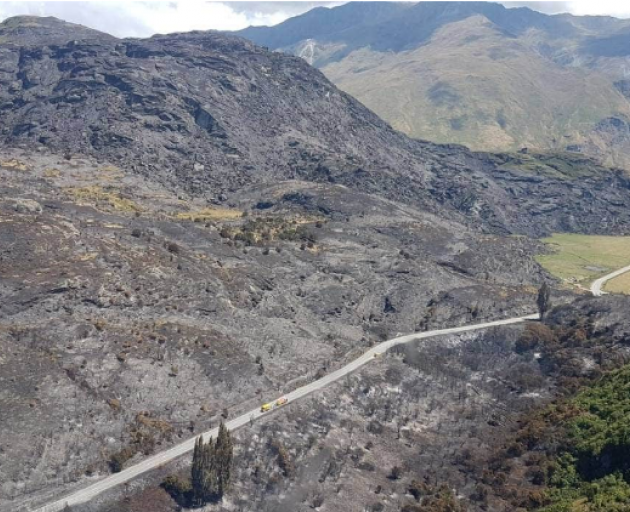 The fire burnt through more than 250 hectares of vegetation. Photo: Supplied/Fenz
Conditions were favourable to contain the fire and he hoped that would be done by the end of the day.

The fire burned down seven power poles and knocked out power to 78 Wanaka and Mt Aspiring customers.

There were 35 customers still without power yesterday and although Aurora Energy was working to restore power, some places could have to go without power for another day or two, Mr Sarich said.

The fire was reported just after noon on Sunday and jumped the road and burned its way into a Department of Conservation reserve near the Glendhu Bike Park.

Firefighters had made good progress containing the fire by noon today but were working in extremely hot conditions to control the perimeter and dampen hot spots.

He hoped that most would knock off about 6pm but a crew would stay on to monitor the situation before crews returned early tomorrow morning.

Tomorrow, firefighters would make sure the perimeter was tightly contained and continue to monitor if over the next week or so.

The fire has extended across parts of Glendhu Bay Station, owned by the McRae family, as well as parts of the Parkins Bay Golf Course project, owned by John Darby.

It almost reached the Glendhu Bay Bike Park, which Mr McRae said was evacuated as a precaution on Sunday.

"It has burned a fairly big chunk of us [the farm] but it didn't hurt the bike park. This is the second fire we have had. The last one was just before we [the bike park] opened in 2019. We had a fire, then floods, then Covid," he said.

Mr McRae said he was pleased no people or livestock had been injured but it was devastating to see the damage to the reserve.

"I think of what happened at Lake Ohau or in Australia. Our firefighters deserve a good shout out," Mr McRae said.

Several residents at Emerald Bay were advised to prepare for evacuation but did not need to. 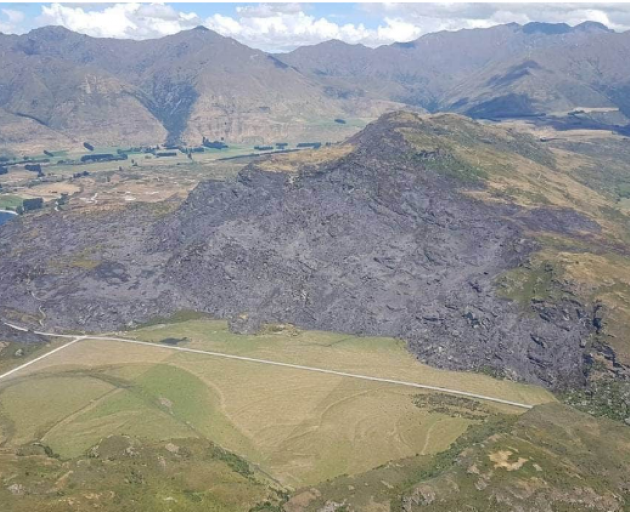 Photos show the difficult terrain the fire tore through, making containment more difficult. Photo: Supplied/Fenz
Operations manager Mark Mawhinney, of Queenstown, said it was fortunate winds overnight on Sunday did not blow the fire towards those homes and properties.

Earlier today, there were eight ground crews working on the containment lines, including two Department of Conservation crews and four Fire and Emergency volunteer crews from the Central Otago and Lakes District.

He worked on the fire on Sunday until 10pm and was back on deck this morning to continue dumping water on hot spots.

Mr Neustroski said he had worked on many other rural fires, including many big Central Otago fires, and had also fought forestry fires in Canada for two seasons.

The Mt Aspiring Road was opened today for residents needing to access their properties but Mr Sarich was asking the general public to stay away from the area.

The company restored 43 customers on Sunday night and has organised generators for customers on the Mt Aspiring side of the fire, communications and engagement manager Lisa Gloag said.

An equipment inspection revealed seven power poles needed to be replaced before permanent power could be restored.

"With fire investigators onsite today, we are un able to access the area until it has been cleared for us to commence repair works.

"At this time, we expect to receive clearance tomorrow, with the repairs expected to take at least two days due to difficult access and the terrain," Ms Gloag said.

Aurora Energy staff would contact its customers still without power to provide an update. More information is on its website and social media pages.

Wanaka Mt Aspiring Rd at Glendhu Bay was closed and power lines were reportedly on fire as the flames continued to spread.

At 8.30pm 10 fire appliances and eight helicopters were fighting the fire, and another aircraft was co-ordinating the air attack. 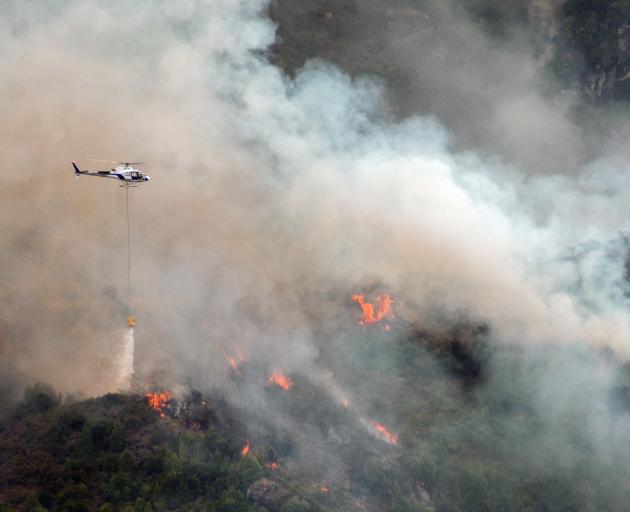 A helicopter empties its bucket in the fight against a fire on Glendhu Hill yesterday. PHOTO: SHANNON THOMSON
The aircraft were expected to stand down from about 9.30pm but some of the ground crews were staying at the scene during the night to monitor the fire.

A wind shift was forecast overnight, which had the potential to move the fire closer to a small number of properties at Emerald Bluffs, Mr Sarich said.

Fire personnel had been in touch with those residents to alert them to the situation. Fenz was also liaising with police and Emergency Management Otago in case precautionary evacuations were required

About 30 cars had been stuck on either side of the fire, but they were given access to pass through just before 6pm. The road remained closed to other traffic.

It was unclear how the fire started, and a fire investigator was expected at the scene today.

Glendhu Station owner John McRae owns the land neighbouring the fire, including popular mountain biking park Bike Glendhu.
Mr McRae said he believed the fire started at the Glendhu Bluffs above Emerald Bay. He estimated 50ha to 100ha of land had been affected.

After emergency services and helicopters were contacted, he made the call to evacuate the park as a precaution.

Part of the fire area was formerly owned by Glendhu Station and had been retired for native bush regeneration, Mr McRae said.

Matukituki Valley farmer Kate Stewart and her daughters Rosie (11 months) and Isla (3) pass the time with a paddock picnic after they could not get home because of road closures due to the fire.
His family had owned the station since 1969 and he had never seen a fire like it there.

"This land in here is actually Doc estate and it’s all beautiful native bush, so all sorts of different varieties of plant — very hard to replace.

"In Glendhu Station’s history that bush has never been cleared, so it’s been there my whole life.

"I’m 46, Dad has been here a bit longer than that ... and today for some reason it decided to burn.

"It’s just one of those sad days — but it’s not people’s lives, it’s not livestock, it’s not houses and it’s not other things," he said.

A Department of Conservation spokesman said about 6pm the fire had also spread to Doc land.

He confirmed Doc would be sending in Doc firefighters to help quell the blaze this morning.

Matukituki Valley farmer Kate Stewart and her family were returning home when they found themselves caught out by the road closure.

Mrs Stewart entertained her children Rosie (11 months) and Isla (3) with a picnic in a paddock to pass the time.

"There’s quite a few of us caught by it," she said.

"Our shepherds are coming home from Cromwell — we’ve told them the road’s closed."

The nearest house was about 5km-6km away from the fire, so she was not concerned about her house, she said.

"It’s such a beautiful place, so for something like this to happen ..."