By Kerrie Waterworth
0 Comments
Skiers and snowboarders finally got their chance to experience new terrain yesterday when Willows Basin had its "soft opening".

After gaining access from Cardrona Alpine Resort, it was a race to be the first down the mountain to the new Willows quad chair and be first on the lift and receive a free T-shirt.

Caleb McDougall (29), of Tauranga, had come to Cardrona for a week of winter sports and had no idea the Willows Basin was opening yesterday. 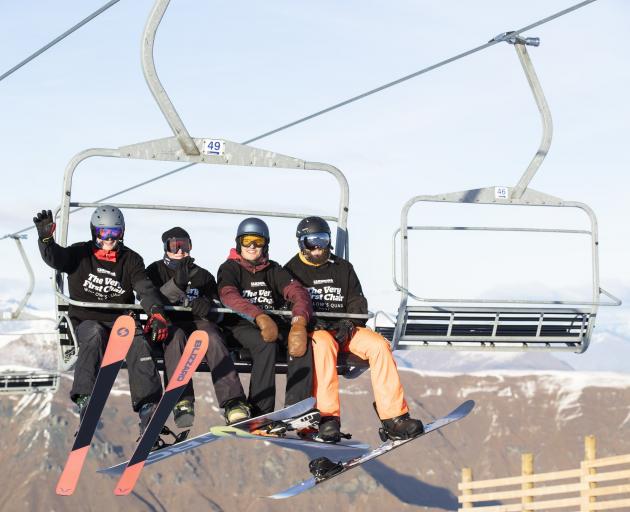 The first skiers and snowboarders to ride on the Willows quad chair were (from left) Timon Tasker, Sam Smithers, Harry Sinclair and Caleb McDougall, all wearing their free "first" on the chair T-shirt.
He was one of the first down the mountain and on the first chair back up and said it was good to have an area that was "not so crowded".

The Willows Basin is in the Soho Ski Area, on the southern face of Mt Cardrona, and is the closest basin to the Wakatipu Basin, overlooking Queenstown.

It is the first new major lift-accessed terrain to open in New Zealand since 2012 and provides access to 65 hectares of intermediate to advanced level terrain.

Cardrona Alpine Resort acquired the rights to Soho in 2018 and general manager Bridget Legnavsky said Willows Basin was the "first stage" in its development of the Soho Ski Area. 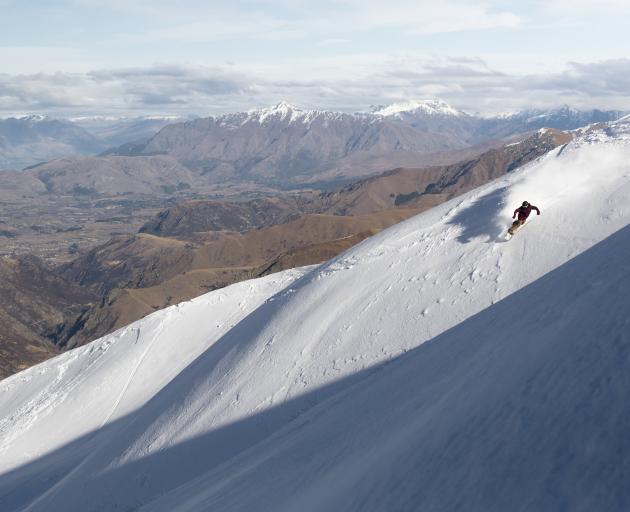 James Mulcahy snowboards on the Cardrona Alpine Resort’s Willows Basin skifield. PHOTOS: TROY TANNER
A lack of snow and rainy days had postponed the opening from earlier this month and it was "amazing and very exciting" to finally have it open, she said.

An official opening and ribbon-cutting would be held tomorrow morning, she said.