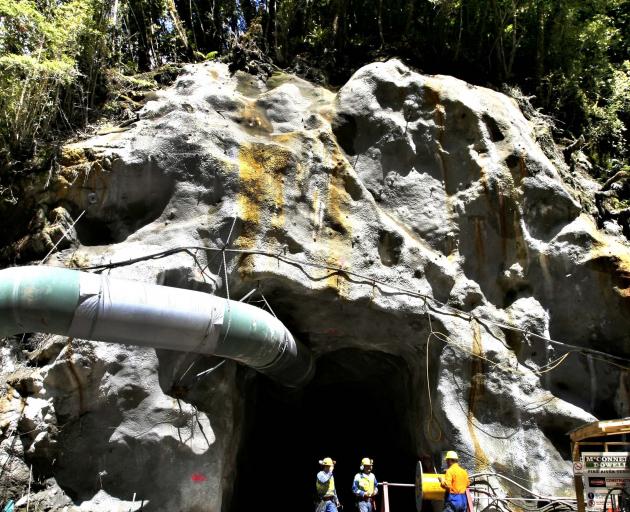 File picture of Pike River Coal Mine portal, where up to 25-30 miners trapped underground after an explosion. Photo: NZME.
Driving a second tunnel into the Pike River mine to act as an escapeway during the impending re-entry of the drift tunnel remains on the cards.

The plan is to drill boreholes and pump the mine full of nitrogen, followed by fresh air.

The Pike River Recovery Agency said a second way out of the mine had been debated robustly at the meeting.

Chief operating officer Dinghy Pattinson said there were three options for an egress: the main tunnel (drift) as the one way in and out; a large-diameter borehole; or driving a full tunnel for ventilation and egress.

During the 2010 disaster that killed 29 men, the 108m-high ventilation shaft, which included a 55m vertical ladder, was the only escape- way. But no-one used it after the explosion and photos of it venting flames and thick smoke came to symbolise the disaster.

Former prime minister Sir William English said a few years ago health and safety laws introduced in response to the 2010 disaster made re-entry all but impossible.

However, Mr Pattinson said existing mines were not required to have a second escapeway until 2024, whereas new mines must have one from the start.

The meeting has also been discussing the boreholes required for reventilation.

Agency chief executive David Gawn said a concept plan for the re-entry had been submitted to the Minister Responsible for Pike River, Andrew Little. A more detailed plan should go to the minister in October, with full risk assessments and costings.