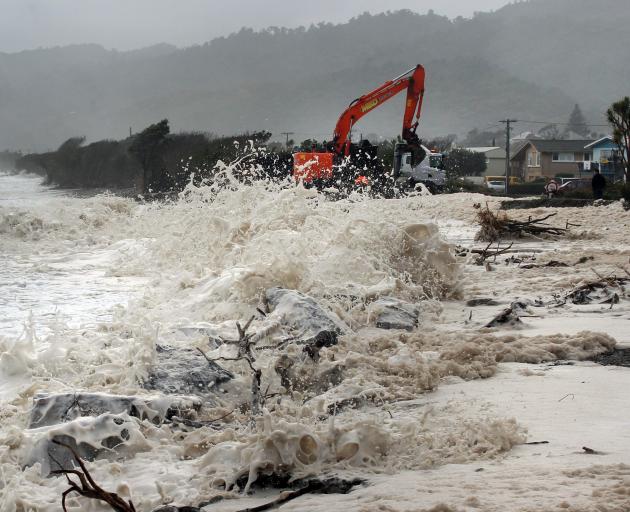 Emergency works under way at Cobden on Saturday.
A weekend of extraordinary weather that brought snow down to sea level on parts of the West Coast, also whipped up ferocious seas that sent residents fleeing in northern Buller and crashed down a sacrificial bund built to protect Jellyman Park in Cobden.

In Hector, occupants of up to six residential properties self-evacuated.

Early on Saturday, the south-westerly swell, bolstered by king tides and the blustery weather, lifted the 1.5-tonne concrete blocks at the end of the Blaketown tiphead and moved them 20m, Port of Greymouth team leader Franco Horridge said.

The blocks were spectacularly "picked up'' by the sea rather than being dragged, he said.

Grey District Council assets manager Mel Sutherland said the temporary bunds suffered "quite a bit of damage'' following the midnight king tide, but contractors were able to restore the bunds and reopen the road later on Saturday.

"It could have been a lot worse if we hadn't done the sea protection wall.'' 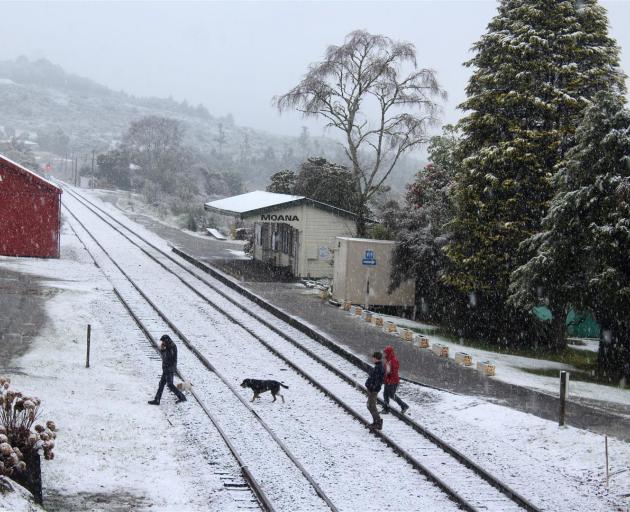 The snowy side of the tracks in Moana. PHOTOS: GREYMOUTH STAR
Buller Mayor Garry Howard said the frontage of Carters Beach Domain "got a fair hammering'', while further north, about six coastal Ngakawau and Hector properties were affected, seawater inundating one house.

Three households at the northern end of Ngakawau self-evacuated.

"It is relatively superficial but concerning and upsetting for those living there,'' Mr Howard said.

The council was keeping a close watch on a buried dump site at Carters Beach, which had been used by the old state coal mines.

It would be initiating further discussion with the community as the sea continued to eat into the frontage of the settlement, on the south side of the Buller River mouth, he said.

"I was like a wee kid - I stood at my back door and just watched it coming down,'' Nan Dixon (87) said of Sunday's rare snowfall.

The last time she saw snow like that was when she was 9 or 10, she said.

"I'm 87 now. I can't remember heavy snow like yesterday. I could not believe it.''

Kumara was also blanketed, which is rare, settling even at the Serpentine beach. Kumara old-timer Joe Payne said it used to snow in Kumara when he was a boy, but it had not done so for many years.

Hokitika and Greymouth had to make do with large snowflakes, which quickly melted.

Reefton bore the brunt of it, with almost 8cm of snow at 8.30am on Sunday.

Weather observer Tony Fortune said the last decent snowfall in Reefton was in 2012.

Snow was still on the trees yesterday morning.

"It's maybe snowed [at Paringa] five times in my lifetime.''

Jimmy Stewart, who keeps records at Coal Creek just outside of Greymouth, last recorded snow there on July 21, 1995.

In Moana, Kevin Klempel said the township's last snowfall was in about 2012.

Rob Lunn said Dobson township had snow falling solidly for about 30 minutes - something he had not seen since he was at primary school - and Blackball was under thick snow for a time.

The wintry conditions closed the Lewis Pass on Sunday, while Arthur's Pass remained open yesterday but chains were essential.

The lower cobden sea front is in trouble / all that happens is talk. is anything going to be built to stop the sea from destroying houses.