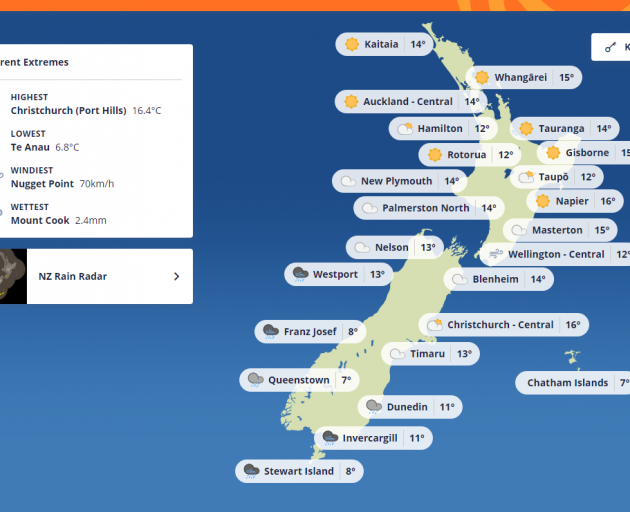 The current site features Westport, Reefton, Greymouth and Hokitika, prompting criticism it did not cover South Westland or the wider Coast.

The new trial site map has just has Franz Josef Glacier and Westport.

That has annoyed Grey District Mayor Tony Kokshoorn, who said the West Coast was spread over 600km, with the main centre in Greymouth.

"Forty-five per cent of workers on the Coast come to Greymouth. It makes sense to forecast that area with that population, it's the hub of the West Coast. Most people are coming through Greymouth -- it needs representation," Mr Kokshoorn said.

Metservice communications meteorologist Lewis Ferris said although Greymouth and Hokitika were not on the current beta homepage map, people could simply enter them into the search bar or click 'towns and cities' on the top bar and locate them in the list.

The updates to the website would not affect the forecasts provided to the television stations, Mr Ferris said.

Other changes include improved marine, rural and mountain and park sections. One of the main changes is an increase in clarity of severe weather warnings on the site.

MetService.com is in the top five of most visited New Zealand-operated websites. See the new site at https://beta.metservice.com/