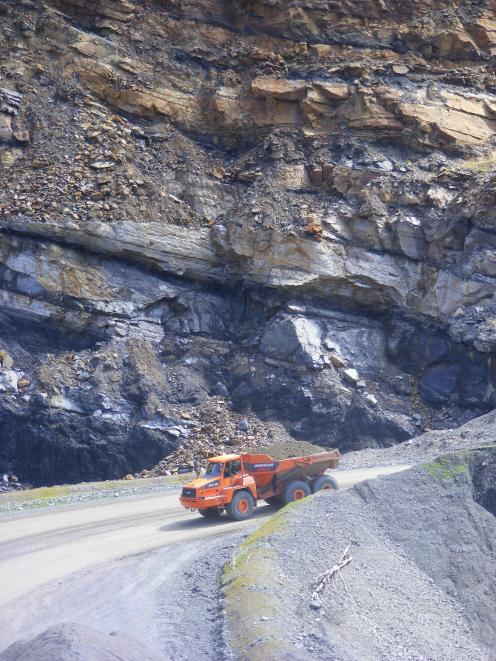 An exposed coal seam on the Denniston Plateau, above Westport, West Coast. Photo: ODT files
The Government's move to a ''zero-carbon economy'' - which will end the burning of coal and casts future coalmines into doubt - will be a ''very difficult transition for the West Coast'', Grey Mayor Tony Kokshoorn says.

The Climate Change Response (Zero Carbon) Amendment Bill, introduced to Parliament yesterday, sets out a plan for the next 30 years.

The Labour-led Government has set a new emissions reduction target for all greenhouse gases, except methane, to reach ''net zero'' by 2050, in line with New Zealand's commitments under the Paris Agreement.

Last year, Greymouth-based mining consultant Phil McKinnel warned it would not take long to make the processing of milk, the heating of hospitals, schools and swimming pools, and heating houses by coal uneconomic.

If passed by Parliament, it will be outlawed by 2050.

Mr Kokshoorn said the West Coast was very dependent on its extractive industries, and even coal fires for heating.

The transition would have to be as light as possible on the economy.

''We would like a level playing field. The Government has got to recognise, for places like the West Coast, it's going to be a lot harder.''

National Party list MP Maureen Pugh said she was watching closely the transition in New Plymouth away from gas and oil after the Government's announced ban.

In Buller alone, GDP was down 44% and the downward spiral could not continue, she said.

''A 'just transition' into tourism is not enough.''

Mrs Pugh also slammed the farming targets, saying they had been set before the science had been done.

One of the few ways farmers could meet them was to de-stock their farms, she said.

The Coal Action Network, however, welcomed the Bill.

''Coal is the dirtiest of the fossil fuels, and this legislation means no new coalmines, no new coal-fired boilers for Fonterra, and a rapid phase-out of all coal burning across the country, including at Huntly, spokeswoman Cindy Baxter said.

Miners, farmers and local leaders used the Zero Carbon Bill consultation meeting as a vehicle to get a message straight back to the Government.

Mr Shaw was told the West Coast was the only carbon positive region in New Zealand, thanks to its vast forests.

Details of the Bill, released yesterday, show it creates a legal obligation on the Government to plan for how it would support New Zealand towns and cities, business, farmers and iwi to adapt to the increasingly severe storms, floods, fires and droughts this country was experiencing as a result of climate change, Mr Shaw said.

Act Party leader David Seymour has said he would oppose the Bill as it would impoverish New Zealand and push economic activity to other countries.

''As a result of the Zero Carbon Act, gross domestic product could be 10% to 22% less in 2050 and the poorest 20% of households could be hit twice as hard because the price of goods and services will rise, according to NZIER [New Zealand Institute of Economic Research],'' he said.

What a stupid government but there is one thing/ they have proven / they just talk with no action/ and in time a change of government will happen who may have different ideas. the present government is not a labour government .