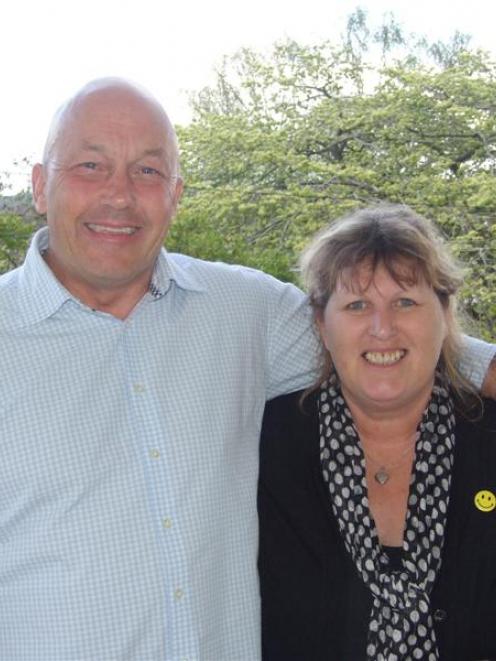 Clutha Mayor Bryan Cadogan celebrates his re-election at home with wife Allyson on Saturday. Photo by Helena de Reus.
Clutha Mayor Bryan Cadogan has returned for a second term in office, after a landslide victory. Mr Cadogan (54) spent Saturday evening celebrating his mayoral victory and his 30th wedding anniversary with wife Allyson at home in Balclutha, joined by friends and family.

''I'm feeling humbled and so proud of my support ... I can't say enough of my support, my friends and Allyson, who has been my rock.''

Preliminary results showed Mr Cadogan won with a clear majority of 4274 votes over his deputy mayor and challenger, Hamish Anderson's, 1463.

''They knew what they were getting this time ... It's an honour and I think its a signal for new direction on council. The public have spoken, overwhelmingly, that it is time for a new era.''

Mr Cadogan said he was proud of the council and its achievements, and welcomed its two new councillors, Jo-anne Thomson (Balclutha) and Selwyn Wilkinson (Bruce).

The immediate focus for the new council would be establishing itself, selecting a new chief executive after existing chief executive Charles Hakkaart announced his resignation last week, effective from January 10, and the $2.6 million upgrade of Balclutha's main street.

Youth initiative Ready, Steady, Work was also set to begin this week, and Mr Cadogan was looking forward to running the course for a second time.

The course, an initiative under the Mayors' Taskforce for Jobs programme, involves a joint approach between the task force and some of Clutha's employers in running a mentoring programme alongside employment.

It was first run last year and was funded by the Ministry of Social Development, which also provided staff to help. The initiative was one of the highlights of his first term as mayor, he said.

''The last three years to me seem to be dominated by issues from the past but it has given me the confidence in our council making the decisions for the wider district.''

Mr Cadogan said he also had a mandate from the public to see rates come into line with wages. Mr Anderson said voters had made a clear choice.

''It's a pretty resounding victory for Bryan.''

He was looking forward to continuing his role as Balclutha ward representative, as he had ''always enjoyed the council process'', Mr Anderson said.

The new council will be sworn in at its first meeting on October 24.