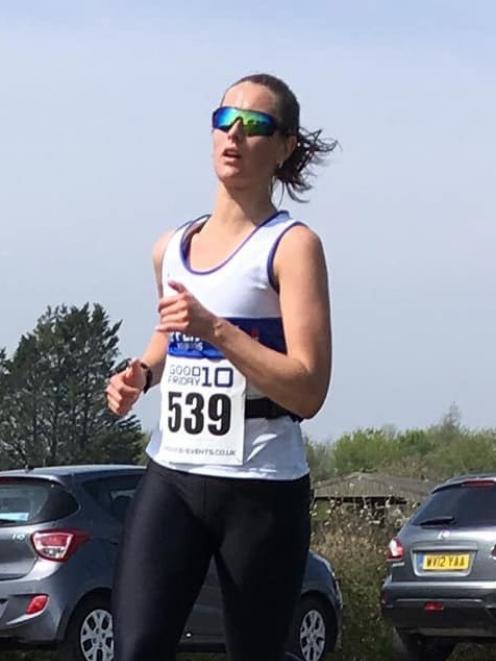 Dunedin Marathon entrant Georgia Wort (Chippenham Harriers) competes in a recent club event in the United Kingdom. Photo: Supplied
Two marathons in three months, one in each hemisphere, will give Georgia Wort the distinction of backing up the fast and furious Edinburgh Marathon with the technical Dunedin Marathon on September 1.

The Edinburgh event borders on being a sister marathon to the Dunedin event.

Both courses encompass a scenic backdrop, but while the Edinburgh event is one of the fastest in the United Kingdom, that in the ''Edinburgh of the South'' has a more demanding terrain.

The 25-year-old University of Bath student viewed scenes of the Dunedin Marathon online and decided it was too good an opportunity to miss.

She will begin a PhD in health and wellbeing at the end of September, so the Dunedin Marathon date has proved a good fit while she enjoys time out from study and pursues her love of travelling and catching up with family and friends spread throughout Australia and New Zealand.

''I thought this would be a great opportunity to tick off another marathon on my 'around-the-world marathon list'.''

Wort was bitten by the marathon bug after contesting her first in Dublin last October, in which 16,166 people competed.

She has always lived an active lifestyle and played hockey until running took over when she began her MSc at university.

''I found it was a lot easier to fit around other time commitments and great to de-stress. I was soon hooked, and signed up to my first half marathon,'' she said.

Wort has combined her love of running and the freedom it offers in the great outdoors with a research topic that looks at ways to overcome inequalities to increase physical activity in primary school children.

''I love running varied routes and recently enjoyed running around the Yarra trail routes in Melbourne,'' she said of a visit to family and friends now based in Melbourne.

Early last year, she downed the hockey stick and donned the running gear.

''It [a marathon] was something that I'd always wanted to do but never thought I'd achieve easily.

''A close friend of mine was a big inspiration and motivated me after she told me she completed her first marathon in Rome.''

Doing regular training runs and inspired by fellow members of the Chippenham Harrier Club, Wort signed up for the Dublin Marathon.

''It was a flat route, the Irish crowd were very friendly and it seemed a good excuse to visit Dublin and sample the local Guinness.''

Wort says running is a simple game, and its basic principles can be utilised by anyone. She has never stuck to a strict training programme, but simply enjoys a mixture of long runs, tempos and effort sessions with club running.

''I was very conscious about not enjoying my first marathon. For me, it was more important to enjoy it and want to keep my passion for distance running than get a fast time. I felt really great and enjoyed more or less the whole run, bar the last 2km, where my legs felt very very heavy.

''The feeling of euphoria and relief when I crossed the finish was fantastic.

''I completed it in 4hr 9min and almost as soon as I had finished, I knew I wanted to do another.

''A large group of us signed up to Edinburgh Marathon. The route goes right along the coast, out and back. The way out was beautiful, sunny but cool weather with the wind behind us.

''The return was, however, another story. By this point I had come to the realisation that I had set off too fast and this, combined with the headwind, made for a tough second half.''

About the 34km mark, she experienced severe cramp and gave in to the temptation to walk, and cover the remaining 8km by a combination of running and walking.

''The final 5km was a tough finish. I was encouraged on by a friend who ensured me I was probably on to beat my previous time. I was not convinced, but I pushed through, refusing to walk again, and couldn't be more relieved to see the finish.''

She did beat her previous time, finishing the Edinburgh course in 4hr 2min.

''I do think if only I hadn't walked so much, I could have done sub 4hr. But this will be a goal for the future.''