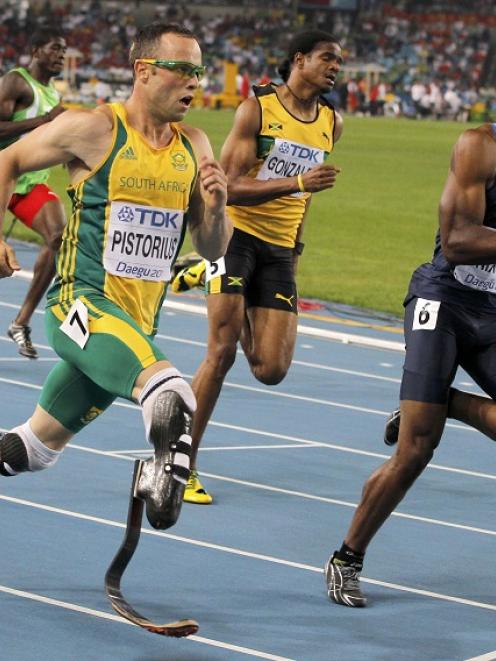 Oscar Pistorius of South Africa (L) runs next to Greg Nixon of the US (R) and Jermaine Gonzales of Jamaica in their men's 400m semifinal at the IAAF World Championships in Daegu, South Korea. Photo: REUTERS/Mark Blinch
There was no Hollywood ending for double amputee Oscar Pistorius in the 400m at the world championships, even if he crossed the line last in his heat to cheers louder than those for most gold medallists.

The South African's battle to overcome a series of legal and performance obstacles and become the first amputee to run at a major championships on his carbon-fibre prosthetic legs has made him a sentimental favourite around the world.

The 40,000 packed into the Daegu Stadium gave the "Blade Runner" a rousing welcome when he came out on to the track for the third and last semifinal of the evening, just as they had when he qualified through the heats on Sunday.

The 24-year-old needed to finish in the top four to have a chance of a place in the final but when he came around the final bend he was battling for last place with Demetrius Pinder of the Bahamas.

Pinder pulled away to leave Pistorius to cross the line at the back of the field in 46.19 seconds, more than a second outside his personal best of 45.07.

Despite finishing last, Pistorius, who had expected to struggle to reach the final, was certainly not disappointed with his second race at a major international championships.

"I worked extremely hard to get here," he said. "I'm happy with my performance tonight ... not as quick as I wanted to be but it's great to have this platform to run on and it's been an unbelievable experience. I'll be back for the relay."

Pistorius will be allowed to compete in the 4x400m relay for his country as long as he runs the opening leg to avoid endangering other athletes with the prosthetics.

The prosthetics replace the lower legs he had amputated when he was less than a year old because of a congenital condition.

American LaShawn Merritt, returning from a ban for a doping violation, was again the quickest of the qualifiers in 44.76 as he was in the heats when he ran the best time of the year.

Jamaican Jermaine Gonzalez was second quickest in 44.99 ahead of Belgian brothers Kevin and Jonathan Borlee, who will line up against each other in Tuesday's final.