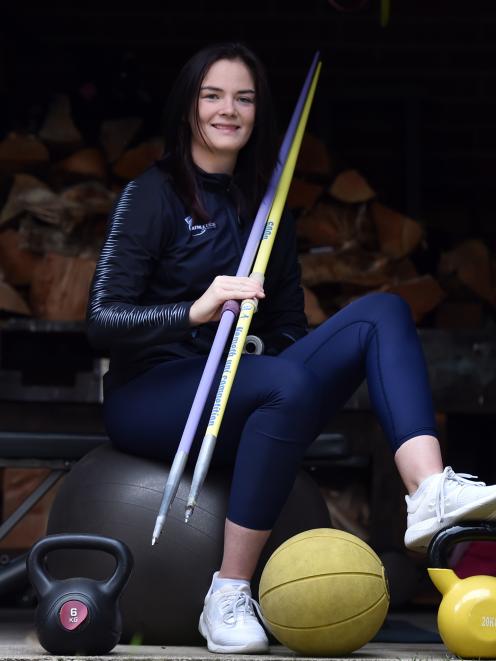 Paralympian Holly Robinson takes a break from training at her flat in Dunedin yesterday. PHOTO: PETER MCINTOSH
The forced four-and-a-half-week break came at a good time for Holly Robinson.

The 25-year-old Paralympian silver medallist had not realised just how tired she was until she was forced to slow down when the country went into lockdown late last month.

It was not all Harry Potter reruns, though. The Hokitika-born athlete had a fitness regime to keep up and she took on some study as well.

Robinson, who has a bachelor’s degree in applied science, is doing a te reo and education paper which will count towards a masters degree in teaching.

She sees herself in a teaching role when she eventually retires from competitive athletics.

But the No1 priority, when the country emerged from lockdown, was to squeeze the javelin in the car and head to the park and let it fly.

"I’ve just been working out at home and haven’t been able to throw my javelin until Level 3," she said.

"So I got out on Tuesday and had a wee throw [yesterday] as well. It was quite cool to finally pick up the javelin and do something with it.

"It has been quite a big break from it and javelin throwing takes time, so at the moment I’m just trying to get my shoulder rolling over and just getting some small throws in and working my way into it."

The sore shoulder was totally worth it. But while she has missed throwing, the break had been had been a blessing.

"Until you slow down I think sometimes you don’t realise how overworked you have actually been.

"Those first two weeks of lockdown I was shattered and I didn’t even realise because you’re just always on the go.

"So it has given me some time to rest my mind and rest my body, so that has actually been really good."

Robinson had planned on competing in the Australian nationals

a few weeks ago.Thereafter it would have been about preparing for the Tokyo Olympics.

The Games were postponed for a year due to the Covid-19 pandemic but Robinson has recommitted to chasing glory in 2021.

The extra preparation time will allow her to focus on technical aspects of her throwing which there otherwise might not have been time for.

"And for me, I’ve gone year-in year-out having big major events. This is my first year in about seven or eight years where I have not had a major competition.

"So it is quite a good time for us to refocus and it gives us that time to work on the things we haven’t worked on. And a winter at home will be quite different for us."