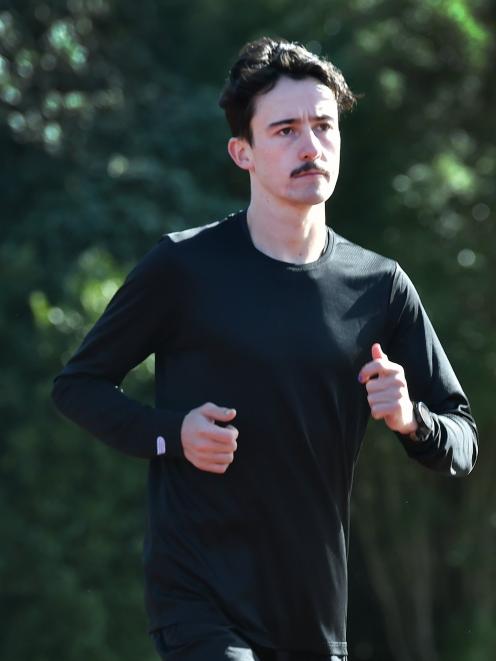 Oli Chignell takes a light jog around the Caledonian Ground prior to leaving for the United States. PHOTO: PETER MCINTOSH
Oli Chignell is hoping not to be away for too long.

Ideally, the Dunedin runner will go to the United States and Europe, achieve his qualifying times, then come back and prepare for the World Championships and Commonwealth Games.

Whether that is how it all goes, as planned, remains to be seen.

However, his intention was always to peak for the coming months.

To put himself into contention for the Games in Birmingham, he will have to run either an A standard time of 13min 17sec, or a 13min 23sec in the 5000m.

The world championship marks were faster again, although all athletes in the top 40 points world rankings would also qualify — and he was inside that at present.

While qualifying for the Games would require a big personal best, he felt he had it in him.

His performance at the Night of Fives had been encouraging, while the increased level of competition would also help push him along.

"I was chasing that B standard at Night of Fives," Chignell said.

"Unfortunately, due to our pacemaker having after-effects of Covid, and not being able to be in there for as long as possible, and not having that high-end competition, there was a wee bit left to be desired in that race.

"I’ve been training better since that and the races I had in the lead up were quite minimal.

"I think the B standard is definitely going to be coming and I think there’s a strong potential for the A standard as well."

Chignell flies out to San Francisco tomorrow, where he will run a 5000m race on Friday.

He will then head to Oxford, in Mississippi, for a week before moving on to London, which is where he will base himself.

He has a race there on May 14 and, while nothing else is locked in, has more in the works for the end of May and start of June.

Should he qualify, the World Championships are in July, and the Commonwealth Games follow.

It would not be Chignell’s first international experience.

He had a stint in Europe in 2019, which he said prepared him well for this time.

While the domestic season had been quiet, he said it could be hard being patient knowing he was targeting later in the season.

All going well, his hope was it would lead to bigger things.

"I don’t think I’ve run a single time which is up to the ability of what I can do," he said.

"I think the difficulty of distance running is you have to have so many things go right. You have to have a perfect day and perfect race to get the best out of yourself.

"I haven’t had the opportunities to do that. I’m hoping this season will be a stepping stone for myself, so I don’t have to do as much of the domestic summer as I normally would.

"I can use the spring and summer here to train and then head overseas and have a proper crack at doing the indoor season before moving on to the outdoor season in America and Europe."