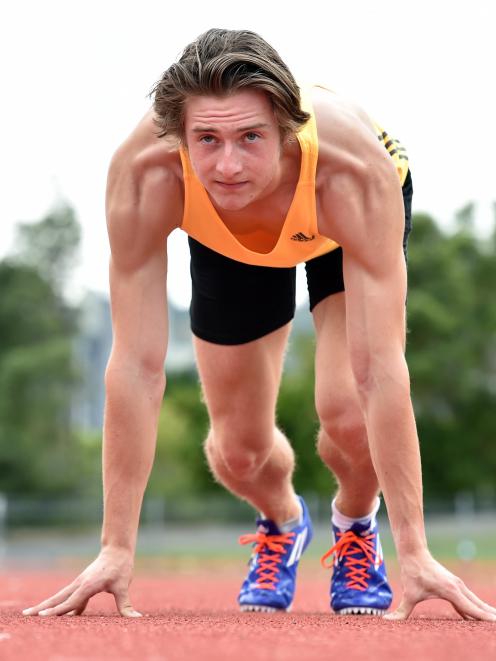 A run of high-flying form means the 18-year-old heads to the national championships, which begin today in Hamilton, as one of the favourites in his event.

The Taieri athlete has shot straight to the top of the under-20 400m national rankings, having spent just two months in the grade.

That has come off the back of some impressive performances in which he has run three personal-bests in his past four races.

In all four, he went under 50sec - something he had not done previously - with the fastest being 49.81sec.

Staying injury-free has been key to that after he struggled with hamstring injuries in past seasons.

Alongside that, he has been travelling to some bigger competitions, all things that had him in a good space heading into the season's pinnacle event.

``It makes a huge difference, having confidence in it,'' he said.

``It means I know how to run a fast time.

He has high hopes for the championships and is looking to build on the silver medal he secured in the under-18 400m in last year's event.

Several others have pushed the 50sec mark this year, although Gouverneur is the only one to break it.

``It'll all depend on the day, but it's one I'd definitely like to take out, get the gold.

``I think if I can carry my good form in and it all comes out and I get a good performance in, then I've got every possibility of doing so.''

It is not just the 400m that Gouverneur is excelling in, having a more than handy 1min 56.85sec 800m personal best.

That is an event he feels he can look at concentrating on in the future, although for now, the 400m is his priority.

``Definitely focusing on the 400 this season.

``I'm trying to get my speed up as much as possible and I'm enjoying a lot more at the moment.

``I think [moving to the 800m will] definitely be an option as I get older. I'll probably begin to train more for the 800 as I get older. But for the next couple of years I'll just be focusing on the 400m.''

He said his coaches, Megan Gibbons and Joan Merrilees, both had long-term focuses, which boded well for his future in the sport.

It was something he was hoping to keep doing, alongside his university studies, which he began this year after finishing at King's High School.

Now living at Arana College, he is studying for a bachelor of commerce degree, majoring in finance.

Gouverneur is not the only Otago medal hope, as plenty of others a chance of doing well.

The championships end on Sunday.