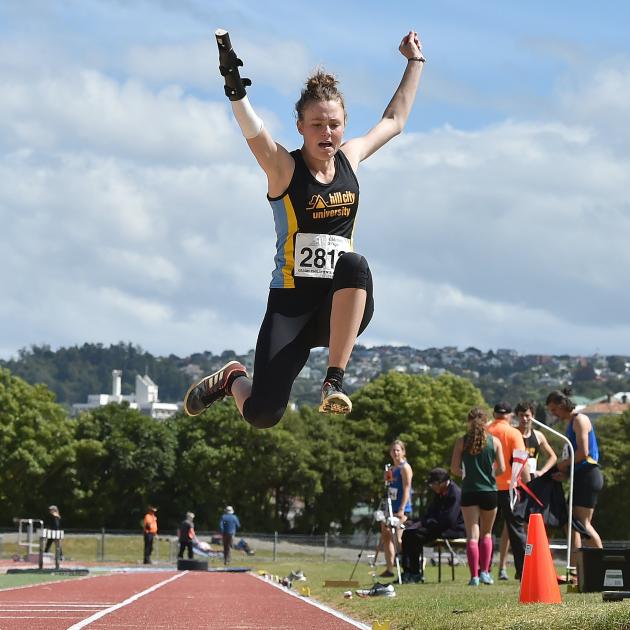 Anna Grimaldi, pictured here at the Caledonian Ground earlier this year, has bagged a silver medal at the IPC para-athletics world championships in Dubai. PHOTO:GREGOR RICHARDSON
Anna Grimaldi's comeback could hardly have been sweeter.

The joy was clear to see from the Dunedin para-athlete draped in a New Zealand flag, with a silver medal hanging around her neck.

Her jump of 5.50m was the third-best performance of her career and only missed T47 long jump gold by 2cm at the IPC para-athletics world championships in Dubai.

She was edged by Ecuador's Kiara Rodriguez, whose flew 5.52m on her first attempt.

It was the her only jump to beat any of Grimaldi's six.

The result was made all the more special given the lead-in.

Grimaldi had spent 18 months battling back from a broken foot and it was only late last year she returned to competition.

"It's been a massive two and a-half years of rehab for me with not knowing if I'd be back to my fullest ever," she said.

"I'm so happy to be back out there and to take home the silver medal, I'm so stoked, I can't even put into words, what a cool comeback."

While the result will be encouraging for Grimaldi, her consistency was just as impressive.

The rest of the field combined only put out two jumps beyond 5.40m and only a further two past 5.30m.

That is a good sign for Grimaldi, who will look to defend her Paralympic gold medal in Tokyo next year.

She felt there was still progress to be made before then too.

"I feel like we're going in the right direction, but there's still a lot left in the tank and I'm really looking forward to next year."

The 23-year-old had competed in the javelin at the last Paralympics, but switched to shot put when the javelin was removed from the Paralympic schedule.

Jade Zaia returned to competition with a 46.31m throw in the men's discus, while 17-year-old Zharna Beattie impressed in the women's event, taking the win with 39.78m.

Dyani Shepherd-Oates continued her good form in the hammer with a throw of 45.43m.

In the sprints Shay Veitch delivered an impressive 11.12sec into a very strong headwind that made for slow times, while Abby Fisher won the women's race in 12.95sec.

Veitch followed up with a 21.66sec 200m into a far milder headwind.

Benjamin Baines threw 29.68m to break a national para-record in the F37 javelin.