By Tracey Roxburgh
0 Comments
It was a sprint to the finish in Queenstown on Saturday in one of the closest men’s races on record in the Queenstown Marathon.

In the end, it was Tauranga’s David Haunschmidt, formerly of Scotland, who came up trumps in 2hr 39min 40sec, 34sec ahead of Hamish Elliot.

Zebedee Stone was another 9sec behind.

Haunschmidt said he could see Elliot and Stone most of the way and, with about 10km to go, "I thought I had a bit more in me, so just went for it".

"I didn’t think I would be standing here, to be honest. 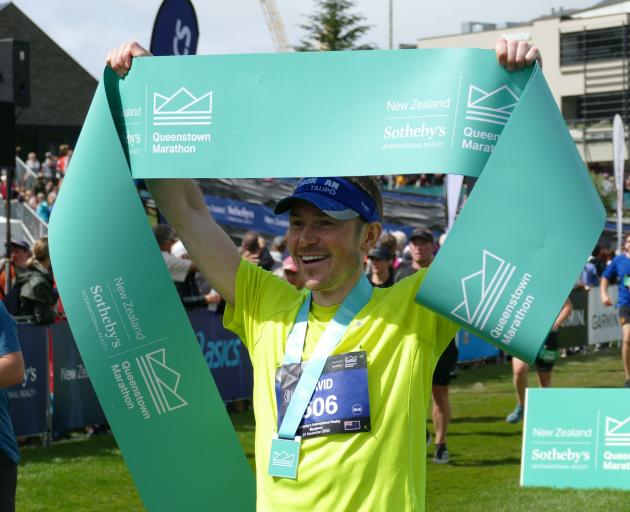 Queenstown Marathon winner David Haunschmidt, of Tauranga, who crossed the finish-line in 2hr 39min 40sec. PHOTOS: TRACEY ROXBURGH
"My preparation consists of triathlon most of the time, with no specific marathon training, but I keep fit with cycling and swimming. It is all about the VO2 max [maximum oxygen intake].

"I usually do trail-running events so to come here and do this is fantastic. It is a bit of a dream and I am not yet sure it is true."

Christchurch’s Hannah Oldroyd, a Great Britain 50km representative, who three weeks ago finished second in the Auckland Marathon, repeated her 2018 victory when claiming the women’s title in 2hr 55min 12sec.

“That was my third run in six weeks and, on the back of not a lot of training, so my legs are a little bit tired, but I survived somehow,” she said.

Oldroyd was almost 5min in front of Dunedin’s Margie Campbell, who finished second, while Emily Stephens (Tairua) was third, another 5min 58sec back.

Jack Moody and Olivia Ritchie took the honours in the half marathon. 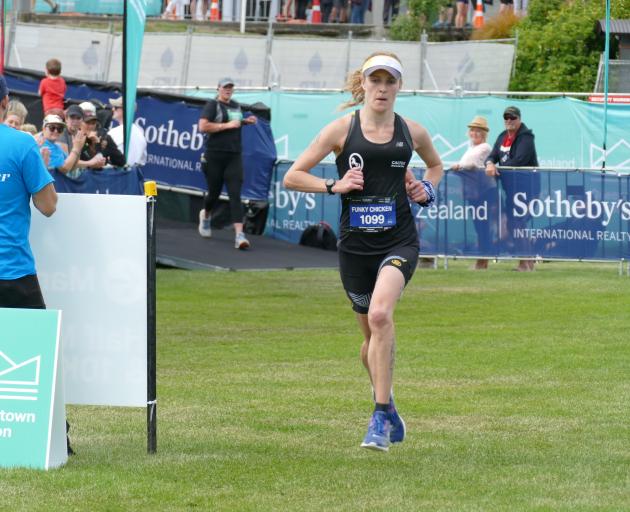 Hannah Oldroyd, of Christchurch, on her way to winning the women’s section of the Queenstown Marathon on Saturday in 2hr 55min 12sec.
Moody said it was "incredible" to think 11,000 people were able to be on start lines on Saturday.

"We are so lucky in New Zealand.

"I have raced only a few times ... since March and look at all the people out here today. It is wicked to just be a part of something again. This is what I do for a living.

Moody said he took off hard at the start, wanting to run his own race.

While he settled in, he "paid a price" in the middle section.

"I always forget how rolly and how punchy those little downhills are.

"It is the downhills rather than the up that take the sting out of the legs here.

Ritchie was thrilled with her win a few months after dealing with an Achilles injury, which had prevented her from running a lot over the past six months.

"I got to the front pretty quick and was supposed to take it easy in the first half, but I don’t think I did — the second half I was really only just holding on."