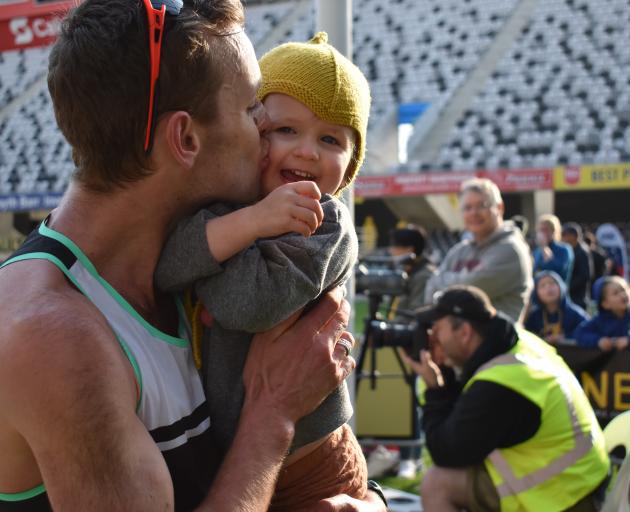 Inkster-Baynes (28), a Christchurch business owner, wasted little time in shooting to the front of the 1021-strong half marathon field with co-favourite Toby Gualter (Wellington Olympic).

Despite misfiring on three of the turns, he crossed to win the national half marathon title in 1hr 9min 33sec.

But for Gualter (18), the result could have been vastly different. The pair took a wrong turn on three occasions due to lack of marshalling, and after Inkster-Baynes lost his rhythm, only a shot of encouragement and good sportsmanship from Gualter kept him in the race.

"We just got stuck into the work once we found our rhythm again. It was really good. We were working together," he said.

The pair remained together until 5km from the finish when Inkster-Baynes wound the pace up, and pushed ahead of Gualter, who finished second in 1hr 9min 49sec.

Inkster-Baynes, said he owed a lot to Gualter, who kept them on track over a disruptive first 7km.

"He helped me keep a lid on it and settle things down after a few unkind words. For a national championship course it was disappointing.

"I recognise they are volunteers and do a great job. But if you want a national champs, let us run as fast as we can. We shouldn't be having a chat about 4km in as to which way we are going. We should be going hell for leather at each other."

Gualter has a big future in distance running after clocking a sub-70min time in what was his first attempt at the half marathon distance yesterday.

He looked through the entries, noticed Inkster-Bayne's name, and figured he would stick with him in order to get a good time.

Grogan, the New Zealand mountain running champion for the past three years, found the course quite technical with its undulating nature and corners.

"It was a beautiful day. I knew there was some strong competition out there and I just decided to do what I do best, which is to go out hard and try and hang on," she said.

Grogan was well aware of the threats posed by Gibbs and Bloomfield.

"When we turned on the course I could see them and knew if I let up at any stage they were going to catch me. I've still got a bit to learn when it comes to half marathons. But it's good to have a win today."

Grogan will head for the World Mountain Running Championships in Argentina in November.

An aggressive start by Oliver O'Sullivan paved the way for victory in the 10km event. St Hilda's Collegiate year 9 pupil Zara Geddes (13) won the open women's 10km race in 40min 51sec. She showed Megan Foster a clean pair of heels in the run home to win by 7sec in a sprint finish.