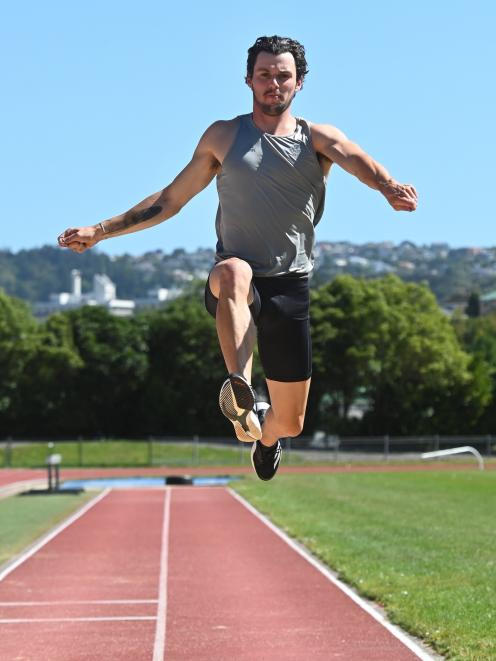 Otago long jumper Felix McDonald has a final jump at the Caledonian Ground ahead of the national track and field championships in Hastings. PHOTO: LINDA ROBERTSON
All going well, Felix McDonald will have a gold medal around his neck by tomorrow night.

He has reached the podium for the past four years, and won the national title in 2020.

This summer, he has been comfortably the best long jumper on New Zealand soil, having surpassed 7.50m three times in his past six competitions.

His personal best of 7.61m, set in Wellington a month ago, elevated him to 16th on the all time national rankings.

It left him content going into the pinnacle competition of the season in Hastings.

"Things have been building up to now," he said.

"The programme was designed so I’d be jumping really good now, not at the start of the season.

"So that’s what we’ve built up to and it actually is working pretty well.

"I’ve jumped a PB in the past two or three weeks, jumped pretty good up in Auckland [two weeks ago]. It’s been decent jumping, so I’m happy."

Veitch won last year’s title and opened a gap at the top of the rankings.

He had a disrupted summer this season and only showed glimpses of his best — notably a mammoth 7.80m jump in Christchurch in November.

During that time, McDonald has made gains of his own and closed the gap again.

It would have made for an exciting prospect — two Otago athletes, who are both elite on an all time national scale, competing for a national title after splitting the past two between each other.

That is a narrative you could not write very often, especially in recent years.

But it would unfair to call it a hollow win for McDonald, particularly if he hits a distance over 7.50m.

A gold medal may now come easier, but he is jumping well enough that he may well have won the battle on the day anyway.

McDonald was quick to play down the inevitable talk of a rivalry, although said it would have been good to have Veitch competing.

"It’s a shame that he’s not there, because I think we’d have a really good competition.

"At his best and my best, I think you could call it either way. It’d be hard to call someone over the other.

"But also on the other hand, I got to nationals, and if you’re not there you can’t win.

"So I’m just happy I can compete at nationals and I’m healthy. I would’ve loved him to be there, but regardless it doesn’t stop me from doing my best."

McDonald had hoped to qualify for the world university championships last year, but Covid-19 put an end to those hopes.

Having now finished his postgraduate study at the Otago Polytechnic, he is setting his sights further ahead.

He was disappointed to have missed the long list for this year’s Commonwealth Games, although was not far off it.

However, there was plenty more to come, and the next cycle of Olympic and Commonwealth Games was a more realistic aim.

He would be in his mid-20s for those and likely at the peak of his career.

It was a case of being patient and putting in the work.

There were more personal bests to come, potentially as soon as tomorrow, if everything falls into place.

He was reluctant to say how far he felt that would be, though.

"I don’t really want to put a number on it.

"I feel like I’m in good enough shape to jump a personal best. Whether that’s 30cm, whether that’s 2cm, I don’t know.

"When you’re getting up to those distances it only takes a little thing to make a big difference. Anything could happen.

"But I’m not going to put a number on it at all, I want to go and jump really well. Whatever distance comes out I want to know I’ve jumped my best."