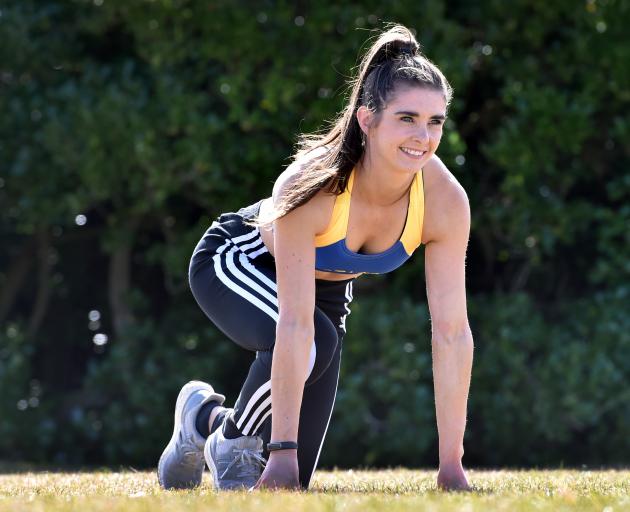 Athlete Sophie Napper practises her starts at Kettle Park yesterday. PHOTO: PETER MCINTOSH
Sophie Napper has made a successful switch from the court to the track.

And she has the medals to back up her success.

Not a bad haul considering she took up the sport seriously only about a year ago.

Napper was a netballer of note after competing in athletics when at Columba College.

"I was doing athletics when I was at high school but went down that netball route. I had a fantastic coach in Janine Southby and just went down the rep path and [that] was a lot of fun," she said.

She made Otago NPC teams, which won titles in 2013-14 and played alongside the likes of Gina Crampton and Shannon Francois. A centre on the netball court, she enjoyed the game but the athletics bug never went away.

Napper joined the track squad run by experienced coach Brent Ward and immediately fell in love with the sport.

"It is just a good squad. A really good culture and a whole range of ages. Some kids that I used to teach and then masters athletes."

Napper runs 400m - the event known as the dreaded long sprint race that nobody wants to run.

"I try to sprint the whole way and weirdly, I like it. It can be 400m of pure hell. You just run as far as you can and wait for the lactic acid to catch up with you.

"My first run over the 400m - I could not get off the ground for five minutes."

But she made improvements and was good enough to pick up a bronze medal in the 400m at the national championships on the new track in Christchurch, shaving 0.3sec off her personal best. She finished in 56.81sec.

"I just wanted to have fun and knew it was going to be a different race. But I was lucky, as I had a few good runners in my heat."

She also picked up silvers in the senior women's 4x100m and 4x400m relays.

"We were up against Auckland A [in the 4x100m] and they dropped the baton on the last change. We had an awesome change in the final change and that was a real buzz."

The racing season was now over and winter training beckoned. A relief teacher, she was looking forward to her new sport.

"I'm loving it, to be honest. Just a range of things really. The coach, the squad, the whole race atmosphere - getting nervous for the race can be kind of cool.

"I'm a real numbers person, having a personal best to aim for and what I have to do to improve and see my time come down."