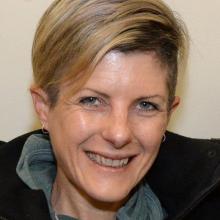 Mel Aitken
Mel Aitken has plenty of incentive to finish at the front of the field at the start of next month.

A three-time Dunedin Marathon champion, Aitken (42) is favoured to win a fourth title in this year's event tomorrow week.

Although work commitments have kept Aitken from contesting the past two Dunedin Marathons, she is already a big part of the event's 41-year history.

Brought up in Dunedin, she did not like running as a young child or during her time at Logan Park High School.

Keen on a police career though, she had to run to improve her fitness.

"Oddly, I got the bug and began enjoying it," she said.

"Now I find it a really good way to balance the work-life thing."

Riding horses remained her first love until a fall left her with four broken vertebrae and a long road to recovery that resulted in her losing her confidence to ride. Once fully recovered, she turned her attention to running.

She entered the 2012 Peninsula Challenge and finished third in the demanding 23km contest.

The result, combined with a can-do attitude and a fierce competitive streak, led to her winning her first Dunedin Marathon title six months later.

She completed the course in a confidence-boosting 3hr 12min 49sec and finished 19th overall.

After working in Dunedin, Aitken moved to the West Coast to be police area commander.

She left that job late last year and is now based in Wellington as a superintendent, filling the role of national manager safer people, in which she promotes and enables wellness and safety so police can remain fit for work and fit for life.

She has lost count of the number of marathons and half-marathons in which she has competed but has enjoyed them all.

Four years into serious running, she won the bronze medal in the 2016 Rotorua Marathon which doubled as the New Zealand marathon championship.

She has a handy personal-best marathon time of 2hr 47min 42sec, which she achieved on the Gold Coast two years ago.

Another recent highlight was finishing second in the New Zealand 100km road championship in Christchurch in early May, when she clocked 8hr 27min.

"My running used to be fairly unstructured until I picked up the assistance of a coach. This has made all the difference to ensuring quality training sessions are run daily. Always early morning. Averaging between 120-160km a week."

She is coached by Tauranga-based Craig Kirkwood.