Sutcliffe, Madgwick set up HCU's third win in a row 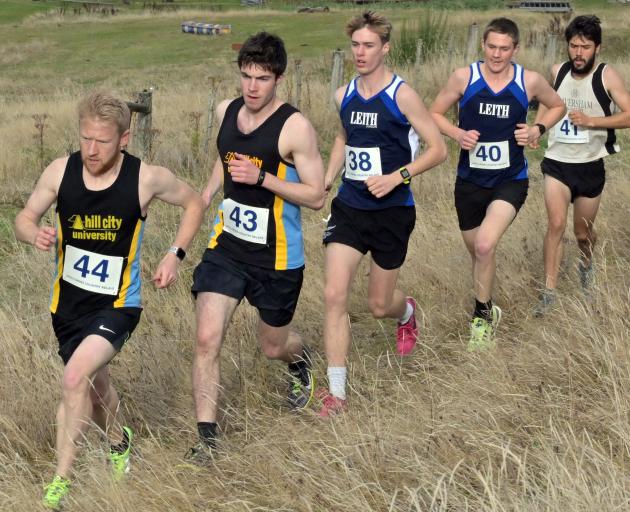 Mastering the Dunedin Pony Club grounds on Saturday with apparent ease, the Hill City No1 team of Sutcliffe, Madgwick, Joel Carmen and Russell Green held off a threat from Leith.

Leith, which last won the title in 1997 on the old Wesleydale course, went into the race buoyed by a strong showing at the Lovelock Relay two weeks ago.

But this threat was quickly eliminated by the runs from Sutcliffe and Madgwick on the first two legs of the 4x4km senior men's event.

Hill City No1 Sutcliffe and No2 Ollie O'Sullivan dictated terms up front from the start and stretched the field at the back end of the course.

That put Leith 25sec off the pace at the the first change.

Sutcliffe recorded the fasted time of 14min 10.4sec on the 4km course

O'Sullivan drifted from Sutcliffe's pace over the closing stages, but clocked third-fastest time of 14min 17.4sec.

Despite clocking the fastest time, Sutcliffe had a run of near misses as he slipped a couple of times and had to keep his stride in check.

He gave his team a 6sec advantage over O'Sullivan's Hill City N2 team at the first change, as Nathan Cochrone changed for Leith in third.

Taking the baton from Sutcliffe, Madgwick left it all out on the course, stretching the Hill City No1 team's lead out to just on a minute.

Nathan Hill did enough to secure second for Leith.

But it was the focus and determination from Madgwick that stamped out the threat from Leith.

"I just went for it on the downhill. That's where you get the leads," Madgwick said.

Despite strong runs from Leith's third and fourth runners Liam Chesney and Janus Stauffenberg, in which they recorded fourth and fifth-fastest times of 14min 20.7sec and 14min 18.7sec respectively, the margin was too much to haul in.

Hill City maintained the minute of time separating the two teams to secure the senior men's title in 57min 38.8sec.

Leith filled second and third steps on the podium, its No1 team completing the course in 58min 38.6sec for second place and its No2 team 1hr 2.08sec for third.

It was a seventh consecutive win in the senior women's 4x2km event for Hill City-University.

Amalgamated in 2011, teams from Hill City and University clubs have dominated the event for the past 25 years.

Rebekah Greene, Taryn McLean, Laura Bungard and Kirsty O'Sullivan literally ran away from the field to win the women's trophy in 35min 45.2sec.