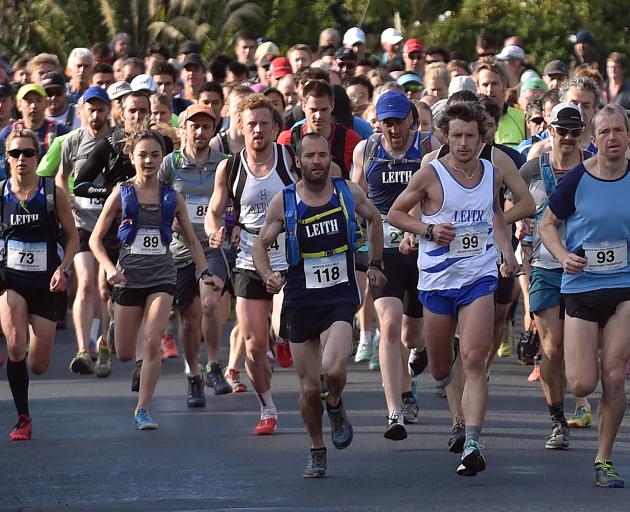 Competitors roar out of the blocks at the start of the Three Peaks mountain race in Dunedin yesterday. In the front are (from left) Sharon Lequeux, Sophie Smith, Jake Jackson-Grammer, Simon Green, Geoff Williams and eventual winner Stafford Thompson. Photo by Peter McIntosh.
It was a case of once bitten twice shy when Dunedin's Stafford Thompson overcame a fast and furious start to win a fifth consecutive and sixth overall open men's title in the 34th edition of Dunedin's Three Peaks Mountain race yesterday.

The 26km trail run encompassing the summits of Flagstaff, Swampy and Cargill on a brilliantly fine day attracted a field of 250.

In seeking a fifth consecutive title, Thompson was left with no choice but to go with an early relentless pace, having learnt the hard way at the recent Papatowai Challenge, when he let Jake Jackson-Grammar open up an early lead.

Jackson-Grammar was one of the early pacemakers again yesterday, and Thompson realised that if he was to have any chance, he would have to hold on to the early pace.

Thompson took the lead halfway up the Pineapple Track on the run up to Flagstaff, then, holding a slender lead at the top, increased it on the run over to Swampy with strong steady pace.

''I think we went up way too fast,'' Thompson said of the run to Flagstaff. ''I felt as though I was red-lining.

''But the thing in a race of this nature is that if someone gets a gap on you, then you may never see them again.''

Despite opening up a handy lead on the run over to Swampy, Thompson was not about to take things lightly.

''I just felt there was someone around me all the time. Once you're in the lead, you can't relax. You've just got to keep on pushing through.''

Thompson added that mud on the course coming down off Swampy and through the plantation on the way up to Mt Cargill slowed him. But aware of his change in tempo, he said it became a matter of maintaining concentration and being aware of his footing.

''I thought if I'm hurting, then everyone else is hurting,'' he said of the thoughts he had on the run over Mt Cargill summit and down to Bethunes before crossing the finish line in Chingford Park in 2hr 9min 51sec.

The race for the women's title ended in an unprecedented deadheat for the open title between North American Nordic ski champions Ann Spencer (Alaska) and Britta Clark (Vermont).

Both are now in Dunedin to complete university studies, and although both knew of each other from Nordic ski competition, they only met on a personal level recently when they both turned out for a Thursday evening harrier run with the Bivouac trail running group.

Although Spencer (22) is now fully converted to off-road distance running, Clark (23) is still managing to balance the two.

''Do you know where I can find some skis?'' Clark quipped about being on the lookout for some cross-country skis to compete in the 42km Merino Muster in September.

Before this, the two have filled their running calendar with events such as the 32km Routeburn Classic in two weeks' time, the 42km Mt Oxford Odyssey in mid-May and the 42km Mt Difficulty Ascent in June.

But Spencer says her skiing competition days are now behind her.

''I'm pretty much done,'' she said of passing up on skiing. ''I'm taking to running. I like running the mountains,'' she added, of finishing second on the mountain running circuit in Alaska before arriving in Dunedin, and winning the 50km event at the Northburn 100 in Cromwell last month.

The two clocked in at Chingford Park yesterday in 2hr 40min 17sec, with Sophie Smith third in 2hr 50mn 15sec.