Adams, who claimed back-to-back gold medals at Beijing in 2008 and London in 2012, also won silver at the 2016 Rio Games and bronze in Tokyo last year, where she made history by becoming the first woman to win medals at four Olympics in a single field event.

The 37-year-old was emotional as she announced her retirement at a media conference today, calling time on a 20-year career at the top level.

"Today I'm here to share with you all that I'm officially hanging up these size 14 throwing shoes.

"After winning my bronze medal in Tokyo, I contemplated whether to embark on another campaign. I took some time to really process this thought and to see if it was something I actually wanted to do again.

"My heart, mind and body simply answered the question for me so it's time to call it a day." 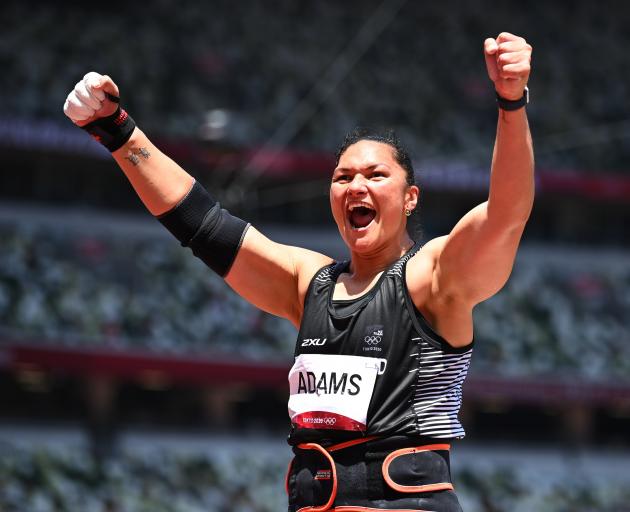 Dame Valerie Adams at the Tokyo Games, where she made history by becoming the first woman to win medals at four Olympics in a single field event. Photo: Reuters

Adams said she was humbled to represent New Zealand on the world stage.

"Representing Aotearoa for the last 22 years has given me so much joy. As my life's work I'm humbled to show that little old New Zealand has what it takes to be the best in the world.

"While today marks the end of my shot put career, athletics will always be part of my life. I have given my heart and soul to this sport. Loved and nurtured it from a young age, watched it grow as a girl to now as a woman fully grown. It is beautiful and exciting, at times hard and unforgiving but always honest. Ever enquiring.

"To all of those that dare lift the shot, I'm looking at you girl, do so with my blessing as it has been to me. I give also to you strength and courage. There is the dream good and true. Take it."

Adams said she will continue to coach her sister, Paralympic shot put champion Lisa Adams, and looks forward to spending more time with her family.

"My mind is happy as I look forward to spending more time with my beautiful family. I'll continue to coach my sister Lisa in her journey to the next Paralympics as well as working in my community and with my incredible sponsors."

She was named the supreme award winner at the Halberg Awards for three consecutive years from 2007 and won the Sportswoman of the Year accolade seven times. 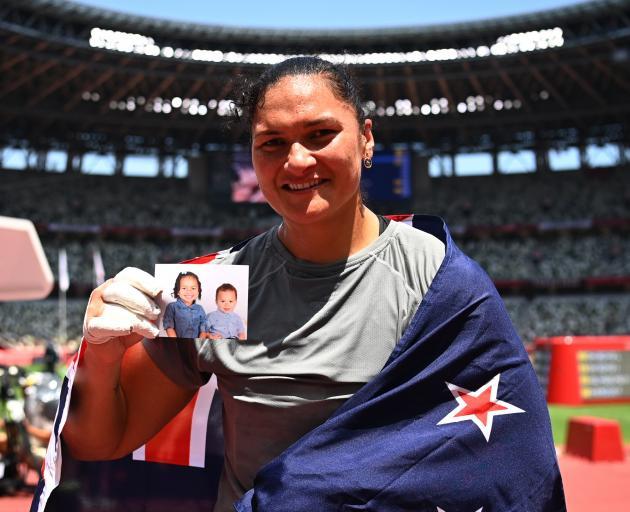 Dame Valerie with a photo of her children, daughter Kimoana and son Kepaleli. Photo: Reuters

At her fifth Olympics in Tokyo last year, Adams carried the flag for New Zealand at the closing ceremony, a moment she said meant a lot to her and her family.

"One day when my children Kimoana and Kepaleli understand what their mum does I hope they will be just as proud of this significant moment too," Adams said at the time.

Following her bronze in Tokyo, Adams said she hoped to inspire other mums and female athletes.

"I hope to continue to inspire female athletes all around the world that if you want to have a kid and you want to come back and be at the top of the world, you can, you can absolutely do that and today's a testament to that."

Adams was named a Dame Companion of the New Zealand Order of Merit at the 2017 New Year's Honours.