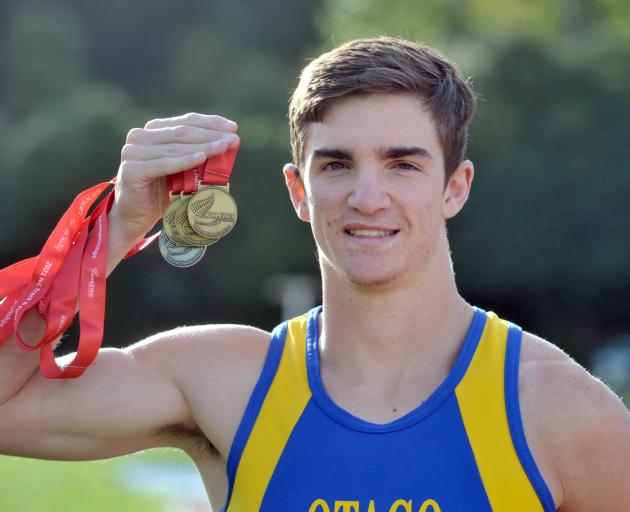 The Ariki athlete was named Otago athlete of the year at last night’s Athletics Otago awards.

It comes after an impressive summer in which the 20-year-old claimed both the long jump and 100m national titles.

He took another huge step up for a third season in a row, putting himself in contention for a Commonwealth Games spot next year.

His jump of 7.71m equalled the Otago senior men’s long jump record, and he also managed a wind-assisted 7.78m.

It was a distance also only once surpassed by a New Zealander in the past nine years.

He also clocked a season’s beat wind-assisted 10.34sec 100m in the national final.

In doing so, he held off strong competition from distance runners Oli Chignell and Rebekah Greene, as well as Paralympic long jumper Anna Grimaldi.

That trio were all acknowledged in other awards.

Chignell and Greene claimed men’s and women’s winter athlete of the year respectively.

The duo both achieved highly on the national stage and both won medals at the New Zealand cross country challenge in Dunedin.

Grimaldi won para-athlete of the year.

The long jumper showed she is well past a serious foot injury and set an impressive new personal best of 5.91m.

Alongside closing in on the women’s T47 world record in the event, it left her second-equal on the open national rankings — including able-bodied athletes.

Cameron Moffitt claimed the junior athlete of the year award, following another dominant summer in the hurdles and showing his versatility in other events.

Alongside Veitch, the Wanaka-based coach has guided an impressive squad of young Wanaka athletes to achieve highly on both the local and national scene.

Megan Gibbons and Mike Weddell were also made life members of Athletics Otago after long involvements and huge contributions to the sport.