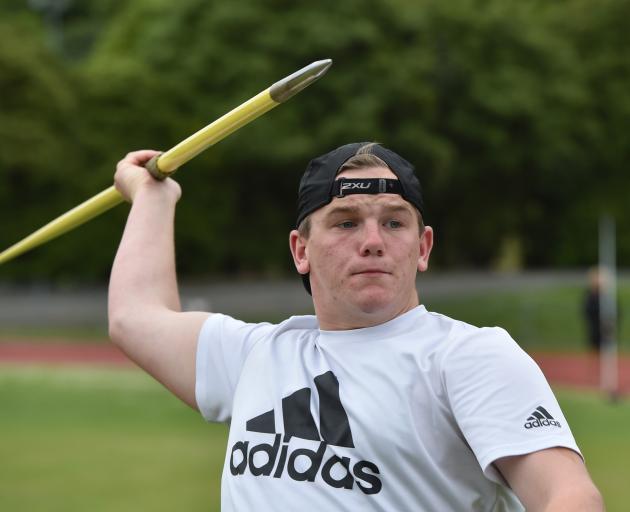 He will be well used to travelling when he heads north for the national secondary schools championships, which begin on Friday.

The 17-year-old has been making the trip to Dunedin and return from Milton every day this year, having moved to Taieri College.

That became possible after his mother secured a job at Grants Braes School.

Had he remained at Tokomairiro High School, he would not have been able to get to his training, as his father also had work during the day.

The move had also helped further his athletics in which he hopes to win gold in the senior boys javelin this weekend.

He admitted it has been a grind at times, getting at 5am everyday and not leaving Dunedin until close to 6pm.

But the results have been worth it.

Some extra early-morning gym work has boosted his strength, while the Caledonian Ground and coach Raylene Bates has become a little more easily accessible.

It has helped him achieve a target, twice throwing 60.04m month ago to break the Otago men’s 17 record.

Breaking 60m had been his goal for the first half of the season, although he had not expected it so early.

‘‘I’d set that for secondary schools, but I hit it before I even got there,’’ the year 12 pupil said.

‘‘So I was pretty stoked I got that.

‘‘It wasn’t until after I got the 60m that I realised it was an Otago record.

‘‘It wasn’t even in my mind until they were saying it was an Otago record and then it was kind of like ‘Oh yeah, that’s good’.’’

Walker feels the three-session-a-week gym training has been key to the improvement.

He is feeling stronger and more flexible, as well as less sore after competitions.

‘‘Just realising that I need a wee bit extra to start increasing my throwing,’’ he said of why he began the gym work.

‘‘You plateau quite a bit and you always need to find those extra outlets to push it that extra bit.

‘‘I needed something to build my strength and physical ability, so it was definitely something I thought I really needed to do.’’

He hopes to claim gold this weekend — as he did at the club national championships in the under-18 grade earlier this year.

A throw of around 58m would put him in contention for that and delivering a consistent performance was his main focus.

‘‘Just hopefully I travel up there and get six good throws out. It’s next year I’m looking at the senior men’s record.

‘‘So next year’s definitely going to be a huge year where I put my head down and put in a really strong grind the whole year.

‘‘This year just six good throws and hopefully come out with a gold medal.’’