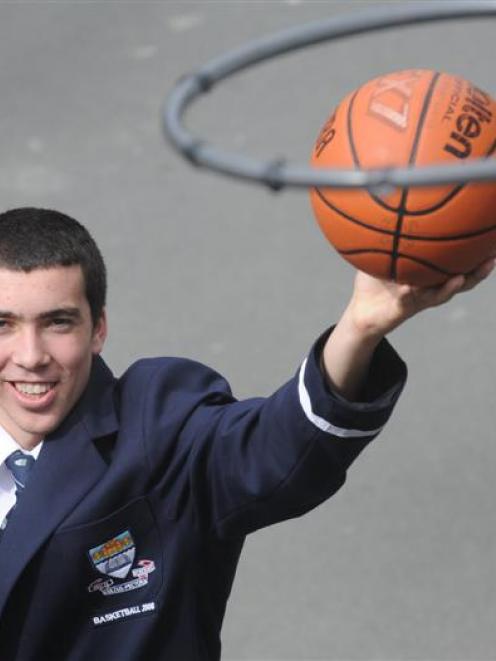 Otago Boys High School year 12 pupil Chris Hood won a bronze medal with the New Zealand under-18 team at the Australian Youth Olympics Festival earlier this year. Photo by Peter McIntosh.
Chris Hood gave up swimming and rugby to play basketball and has no regrets.

The 1.98m tall 16-year-old cannot keep the smile from his face when he talks about his recent success.

The Otago Boys High School year 12 pupil was selected for the New Zealand under-18 team which competed at the Australian Youth Olympics Festival earlier this year.

The side was well beaten by China and Australia but defeated Japan in the play-off for the bronze medal.

Chris, who hails from Timaru, had to be content with starting from the bench, but it was a huge thrill for the teenager.

"There was people there from about twenty different countries and it was pretty awesome," he said.

He was selected for the side last November after impressing at a training camp and has been invited to trial again along with three locals: Ollie Smith (Bayfield High School), Ben Mackay (Kings High School) and Damon Cleverly (Logan Park High School).

Chris had a growth spurt last year and hopes he is still growing. But despite towering over most of his classmates, in basketball terms he is a "tweener" - not quite tall enough to play in the forward line and too tall and ungainly to play as a guard.

He is working on his speed and mobility, and practising his shooting from the outside to help smooth the transition from power forward to shooting guard.

Starting from the bench was fine, but Chris is determined to get more court time this season. Offering more on offence is one way he hopes to achieve that goal.

He gave up a promising career in swimming and cast off the rugby boots to pursue his basketball dream. Chris was a handy swimmer and told the Otago Daily Times he finished fifth at the age-group nationals in the 400m freestyle.

"Rugby had to go first. Then it was a choice between swimming or basketball because there was not enough time to do both."