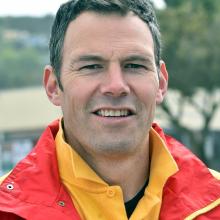 Brent Matehaere
The team is back and now it has a coach.

Brent Matehaere has been announced as the new Otago Nuggets head coach.

He will guide the side in next year's games, which include the National Basketball League's pre-season blitz, and in its NBL return in 2021.

A former Nugget, Matehaere brings plenty of coaching experience to the role.

On a local level, that has consisted of teams including the Otago Gold Rush, Otago representative teams and Otago Boys' High School.

He has also been involved with various national teams, including the Tall Ferns.

Leading the Nuggets is something he rates highly among all of that.

"When you think about who you've coached and where they've got to, that's a pretty special feeling to help people on their journey.

"The very short stint with the Tall Ferns was very special to me.

"But the Nuggets being a semi-professional team is going to be a big challenge and one I'm looking forward to."

The extra year would give him a chance to do some planning and begin looking at players to put on the court.

Matehaere hoped to put out as strong a team as possible at next year's pre-season blitz in early April.

Plenty of locally-based players were already working out, while others now elsewhere with links to Otago would be among recruiting targets as well.

He was unsure as to who his assistant coaches will be, although plenty of people had said they were keen to help.

The pre-season blitz would probably be a tournament to test things for 2021, although he still wanted to be competitive.

"We're not going to hang our hat on our results there.

"But it's something we want to put our best foot forward, prove to the other players in the league that we're serious about doing well.

"We're not just going to step on to the floor to make up the numbers; that's not something I'm keen to do.

"We want to make sure we're going out there and giving our best shot every game."

He said community support was a key factor, both in helping provide a financial base and building the team in the region.

Creating a pathway for kids to aspire to was a goal and ensuring the team remained sustainable in the long-term was important in that.

He said basketball was on the brink of something big.

It was continuing to grow at school level, while the NBL was making progress, being viewed by 1.6million people on Sky Sport last year.

The Nuggets were granted provisional entry to the NBL for 2021 earlier this year, having been out of the league since 2014.