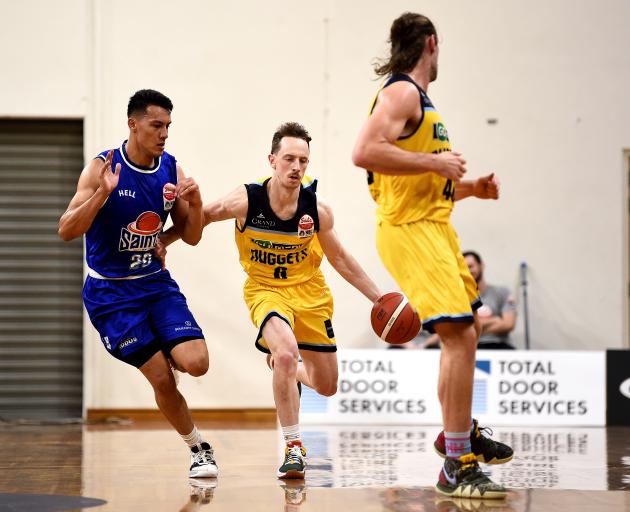 Otago Nuggets guard Darcy Knox dribbles the ball up court watched by Saints guard Kenneth Tuffin and Nuggets forward Geremy McKay at the Edgar Centre on Saturday night. PHOTOS: GETTY IMAGES
It was a stark reminder last season is over.

The Otago Nuggets returned home for the first time in seven years as the National Basketball League began on Saturday night.

But it was the Wellington Saints doing the celebrating, as they claimed a 95-73 win over the Nuggets, in front of a crowd of about 1300 at the Edgar Centre.

The game got away from the Nuggets in the second quarter.

After a strong start by the hosts, the Saints leapt out to a 57-38 halftime lead.

They used their on-ball screen to initiate the offence and generate a ton of open shots.

Dion Prewster, in particular, sent the defence into chaos with 31 points, seven assists and getting the Nuggets guards into foul trouble.

That foul trouble was key. 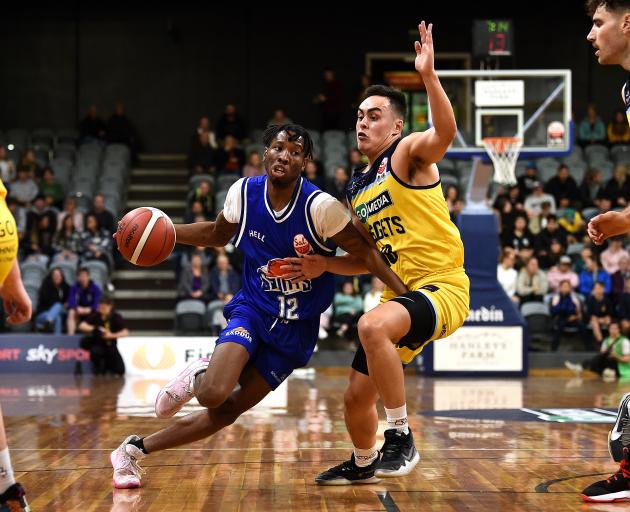 Saints guard Kerwin Roach drives to the basket while his opposite Richie Rodger tries to stop him and Nuggets centre Sam Timmins comes over to help at the Edgar Centre on Saturday night.
Both Richie Rodger and import Isaiah Moss spent long periods on the bench in the second quarter, both on two fouls.

When the starters returned, the side held its own, but the lack of depth was telling.

Moss showed his value with 20 points and the score was tied across the 22 minutes he was on court. During Rodger's 20 minutes the side was only four points down on the Saints.

Centre Sam Timmins was also influential with 18 points and nine rebounds, while Josh Aitcheson chipped in with 14 points.

Outside of that trio and Rodger they struggled against a classy opponent.

Notably Geremy McKay will want to give more in his next outing.

You could not fault the Australian forward's effort, but one of nine from the field, five turnovers and a plus-minus of -34 is not enough from an import.

"We knew it was coming, we had a couple of plans and they didn't work," he said.

"We resorted to going under and Dion Prewster played a fantastic game, controlling the tempo.

Matehaere agreed the game got away from the team in the second quarter.

Foul trouble had been a big factor for the guards and he said it was a tough decision to leave Rodger off.

"That was the issue wasn't it?

"Do we chuck him out early and potentially get three [fouls] and put him under pressure in the third and fourth [quarters], or do we back the guys on the bench?

"We went with the guys on the bench and we had a lot of of trouble and that was because of Prewster."

The Nuggets led for much of the first quarter, before the Saints took a 31-24 lead at the first break.

A telling period followed, as Moss joined Rodger on the bench early in the second quarter.

The Saints scored at will, while the Nuggets offence became sloppy.

The Nuggets held their own after halftime but the Saints went on a run late in the third quarter to take the deficit past 30.

A solid finish allowed the Nuggets to win the final quarter, but the deficit was too much to haul in.

The Nuggets play again this Saturday, against the Taranaki Mountainairs, at the Edgar Centre.