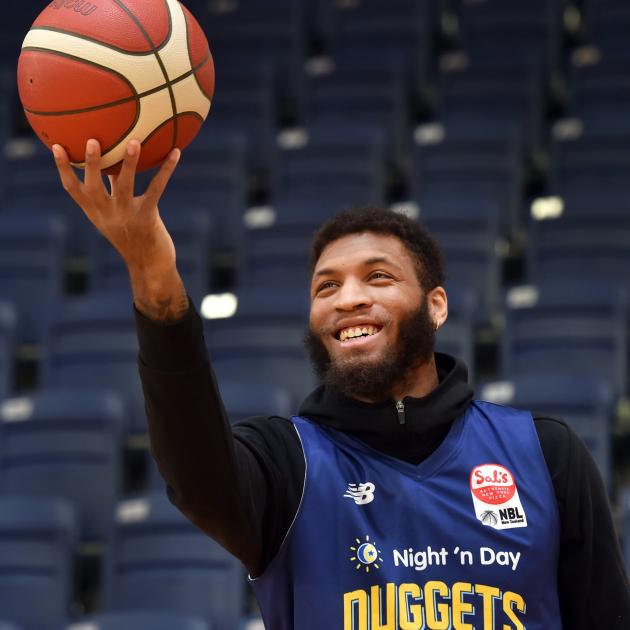 It is the first thing you notice when the 2.02m forward goes up for a rebound.

He seems to be at the apex of his leap to contest possession then his arm just keeps reaching upwards to cleanly snatch the ball.

The second thing you notice is his energy and intensity to quell the opposition threats defensively.

Then his explosive flair on offence and ability to throw down a thunderous slam dunk becomes apparent.

And lastly is his ability to be money on the catch-and-shoot from deep.

That is the 26-year-old import’s value to the Otago Nuggets.

He is capable of torching an opponent — as he did in scoring 30 points and shooting 7-of-9 from the three-point line against the Hawke’s Bay Hawks.

But he is equally capable of dominating a game when he is not scoring — such as the week before when he scored three points against the Wellington Saints.

"That’s what I want to pride myself on," Withers said.

"I don’t look to be a 30-point scorer every game. It might be to a fault of myself, but I’ve always wanted to impact the game. That’s a big thing for me as a player.

"I always want to impact the game whether it’s defensively, offensively, being a leader on the court, doing whatever my team needs for us to win, that’s all I do.

"Whether it’s getting a rebound, fouling someone hard if I need to, whatever it takes to help my team win and bring a championship to Otago."

It was something Withers learnt growing up in one of basketball’s heartlands.

Originally from Greensboro, North Carolina, Withers only had one college offer coming out of Northeast Guilford High School.

That was to NCAA division two Queens University, in Charlotte.

He did not star there at first, either.

But he progressed throughout his four years and had no intention to transfer to division one, showing loyalty to the coaches that stuck by him.

He was named to the division two All-American first team in his final year, before linking with the Grand Rapids Drive in the NBA G League.

That led him to the Detroit Pistons, where he played summer league and made it into an NBA pre-season game.

He said it was an amazing experience and he learnt a lot being around the likes of Blake Griffin and Andre Drummond.

"They taught me how not to be a baby any more, for sure," Withers said.

"It gave me a different passion for basketball. Being able to see how those guys work in their environment and how to treat myself as a pro, and be a pro, on and off the court. It taught me a lot."

A season in Italy followed, before playing with the Adelaide 36ers in the Australian NBL.

Withers arrived from Adelaide a month ago and has made an immediate impression with the Nuggets at both ends of the floor.

He was enjoying Dunedin and having fun playing for the Nuggets, expecting to continue improving as he adjusted to the physicality of the league.

They will look to continue their four-match winning streak tonight against the Southland Sharks in Invercargill.

There he will get to play one of his Adelaide team-mates — highly touted Dunedin-born teenager Mojave King, son of Nuggets’ great Leonard King.

"I called him the other day talking to him about how much we were going to beat him.

"It’s fun. It’s crazy how things come full circle when it comes to basketball. You’re team mates at one point, then you’re playing against each other the next.