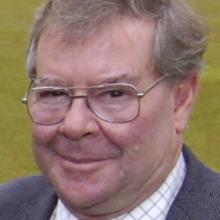 Geoff Hanna.
Geoff Hanna reached the pinnacle of his career in bowls administration when he was elected a life member at the 110th annual meeting of Bowls Dunedin this week.

Hanna (72) joined the Limehills Bowling Club in Southland 43 years ago when he was teaching in the district. He also became the secretary of the Western Southland Bowling sub-association.

He joined the Opoho club when he shifted to Dunedin to become deputy principal of  Mornington Primary School in the 1970s. He joined the Mornington Bowling Club 30 years ago.

The others are Ian Roche (Tainui) and Ken Stott (Roslyn) in 2003, Margaret Malcolm (Port Chalmers) and Margaret Grubb (Waikouaiti) in 2004 and Dorothy Burnard (Green Island) in 2011.

This was Hanna’s third life membership in bowls. He was given the honour with the Mornington Club and with Kitty Hawks Dunedin in 2015.

His wife, Patsy, is also involved in bowls administration and has been the Mornington club’s executive delegate for a decade.

Geoff and Patsy have both won one Bowls Dunedin title. His brother, Bruce, has represented Southland at bowls.

Hanna spent 22 years teaching before becoming a financial adviser for the next 22 years before his retirement.

Hanna’s expertise in finance has helped both the Mornington club and Bowls Dunedin and has been his major contribution to the sport.

The Mornington club put in a $220,000 all-weather bowling green eight years ago, and Hanna’s main contribution with Bowls Dunedin has been finding sponsorship and setting a budget for representative teams.

Jan Tucker was elected president and Dennis Sharp vice-president at the annual meeting. The new board members are Isobel Bell (Roslyn) and David Natta (Macandrew Bay).